Subscribe Us
HomeLatest NewsNun kneels in front of police to stop Myanmar violence, but in vain
Latest News

Nun kneels in front of police to stop Myanmar violence, but in vain 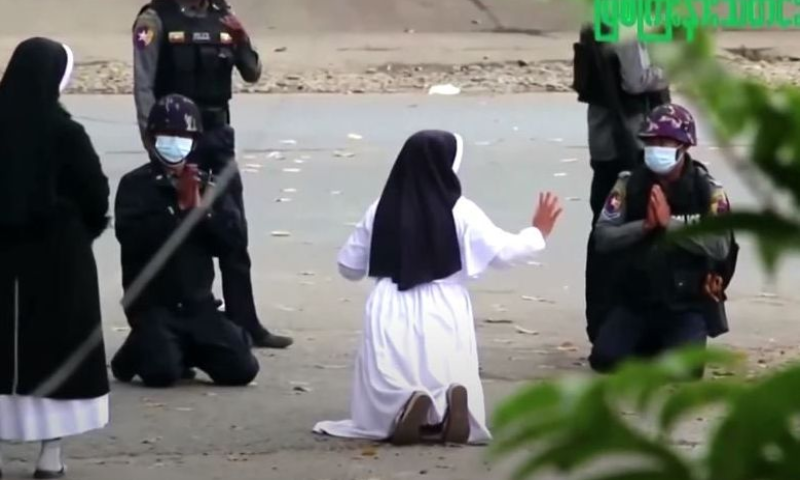 Myitkyina: A nun went down on her knees in front of policemen in a northern Myanmar town and pleaded with them to stop shooting protesters agitating against last month’s coup.

Ultimately, however, she did not succeed.

A video showed Sister Ann Rose Nu Tawng in a white robe and black habit kneeling on a street in the town of Myitkyina speaking to two policemen who were also kneeling.

“I begged them not to hurt the protesters, but to treat them kindly like family members,” she told Reuters in a telephone interview.

“I told them that they can kill me, I am not standing up until they give their promise that they will not brutally crack down on protesters.”

Tawng, who runs a clinic in the town, said she had received assurances from senior officers that they were just clearing the road.

Tawng and one of the policemen are seen touching their foreheads to the ground, but gunfire started soon afterwards.

“We heard loud gunshots, and saw that a young kid’s head had exploded, and there was a river of blood on the street,” Tawng said. At least two protesters were killed and several others injured, she and other witnesses said. A military spokesman and police in Myitkyina did not respond to requests for comment.

Tawng tried to bring some of the victims to the clinic before she was blinded by tear gas.

“Our clinic floor became a sea of blood,” she said. “We need to value life. It made me feel so sad.”

Over 60 people have been killed and more than 1,800 detained in the crackdown on protests against the February 1 coup, an advocacy group has said. Reuters