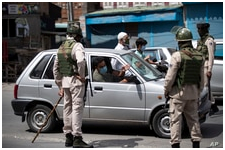 Islamabad – One year after India revoked partial independence for a territory under its control, residents and human rights groups say the situation in Indian-controlled Kashmir remains deeply disturbing.

“(H)undreds of people remain detained without charge, critics are threatened with arrest, and access to the internet is limited,” wrote Human Rights Watch, an international rights monitoring group, in a press release Tuesday.

Local authorities enacted a curfew Tuesday and Wednesday in anticipation of protests marking the one-year anniversary of a change in the Indian constitution that revoked article 370, which granted the Muslim-majority Jammu and Kashmir state special status.

While the decision was later reversed, Sheikh Akeel, a university student in Srinagar, said locals felt like they were imprisoned.

“Since August 5 last year we are living under a fascist regime like prisoners in an open-air cage, he said. “Killings, arrests, detentions under draconian laws, destruction of property while the world has turned a blind eye toward us.”

A year on, there is  little semblance of normalcy in restive Himalayan valley, say analysts and rights groups

The scenic territory in the foothills of the Himalayas, has been in dispute between India and its neighbor, Pakistan, since both declared independence from the British in 1947. Both countries claim the territory in its entirety and have fought several wars over it. Cross-border shelling along the Line of Control, the de-facto border dividing the region into Indian and Pakistani controlled areas, is common.

Pakistan declared India’s actions of August last year illegal and in violation of bi-lateral agreements and United Nations resolutions that call for a plebiscite to allow the local population to decide its fate.

India rejected the criticism, saying the action was an internal matter designed to better integrate the region with the rest of the country and usher in an era of economic development.

On the anniversary of the revocation, Indian officials said the move has panned out well.

“Many districts in J&K (Jammu and Kashmir) are now terror-free. Anti-terror operations are being executed in a coordinated manner and are receiving support from local residents. Residents of J&K and Ladakh can now aspire for the same opportunities that residents in other states have,” wrote G. Kishan Reddy, an Indian government minister, in his column Wednesday in the English-language newspaper The Hindu.

He also said Indian government’s actions had received “overwhelming support from all sections of society and the international community.”

Women hold crossed out portrait of Indian Prime Minister Narendra Modi as they participate in a train march to mark the first anniversary of India’s decision to revoke the disputed region’s semi-autonomy.

In Pakistan, the day was marked with nationwide protest rallies and high-profile events involving the senior leadership of the country.

“The conditions in (Indian-controlled) Kashmir are so bad that it can only result in the region’s independence,” Khan said, reiterating his comparison of Indian Prime Minister Narendra Modi and his ideology to Adolf Hitler and Nazi Germany.

The prime minister of Pakistani-controlled Kashmir, Raja Farooq Haider, warned of what he called Indian efforts to change the demography of the region through a new law introduced in May.

The law allows non-Kashmiris who have worked or studied in the state for a certain period to claim a residency status and access to government jobs. Previously, outsiders were barred from buying land or enjoying benefits reserved for residents.

Kashmiri journalist Islam said the local population was apprehensive but staying quiet due to fear.

“Right now, no one is speaking against the newly introduced laws because people fear that they might be imprisoned for months, the way several mainstream Indian politicians, pro-freedom leaders, businessmen, lawyers were detained a few days before August 5 last year,” Islam said.

A barbwire blocks a deserted street on the first anniversary of India’s decision to revoke the disputed region’s semi-autonomy, in Srinagar, Indian controlled Kashmir.

Unlike Pakistan, authorities and mainstream media in India seemed to have mostly ignored the day.

“The issue has been discussed with concern in some editorials, and the usual suspects, the left and the liberals. But by and large, the nation’s focus is elsewhere— on the foundation stone laying ceremony in Ayodhya. Even if that was not the case, Modi’s decision to abrogate article 370 has popular support in India,” said Delhi-based journalist Javed Mustafa Ansari.

The Ayodhya ceremony, led by Modi, marked the beginning of construction of a Hindu temple at the site of a mosque demolished by a Hindu mob in 1992. Many Hindus, particularly those belonging to Modi’s Bhartiya Janata Party, believe the site was the birthplace of Ram, one of Hinduism’s most extolled deities.  www.voanews.com

UN calls for inclusion of women in Yemen peace talks

UN calls for probe into rights violations in IIOJK