Islamabad: Pakistan strongly condemned the unjust demolition of ancient Bilal Mosque in BJP-ruled Haryana by Indian authorities in consort with pliant judiciary under the BJP-RSS regime.

It is another attack on the human rights of India’s Muslim minority. The mosque was razed to the ground as per the Indian Supreme Court’s orders to demolish the encroachments on forest land in Faridabad.

The demolition is clear evidence of the government’s bigotry in India. Minorities in India do not have the slightest protection and this move has exposed the extremist face of India to the world.

In a statement, Foreign Office Spokesperson Asim Iftikhar Ahmad said that the Hindutva driven BJP-RSS combines perpetual targeting of Muslims and their places of worship is an indelible blot on the so-called “largest democracy.”

He recalled that the Indian Supreme Court in a controversial judgment in November 2019 allowed the extremist Hindu parties to construct Ram Mandir at the historic site of Babri Masjid, which was demolished by Hindutva goons in 1992.

The Indian judiciary, the FO statement added, was also culpable in acquitting the criminals who had organised the destruction of the Babri Masjid in public glare.

The spokesperson said that Muslims and their places of worship were attacked with state complicity during anti-Muslim pogroms in Gujarat in 2002 and in Delhi in February 2020, and without any judicial accountability.

“Targeting of Muslims and their religious places and cultural heritage continues unabated in Indian Illegally Occupied Jammu and Kashmir (IIOJK) and in India,” he added.

“We call upon India to ensure safety, security and well-being of its minorities, including Muslims and their places of worship and cultural sites,” he added.

Earlier on August 23, a mob in India’s Madhya Pradesh had mercilessly beaten a Muslim bangles seller after he had apparently used a fake name.

“If a man hides his name, caste, and religion then bitterness comes in,” the state’s Home Minister Narottam Mishra had said in response to the incident, according to a news report.

The minister had said the incident — which had occurred in MP’s Indore— should not be given a given “communal colour”. The mob had also reportedly robbed the man of 10,000 Indian rupees.

“He was using a Hindu name, though he belonged to a different community. He also had two different Aadhaar cards […] he was selling bangles which our daughters wear and apply henna during sawan (monsoon) […] that’s how the altercation started,” the minister had said. Web Desk 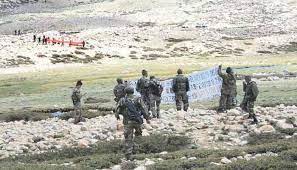 Tensions between India and China once again escalated in Ladakh

The never ending war in Afghanistan