Only 3-4pc of Indian police personnel are Muslim, study finds 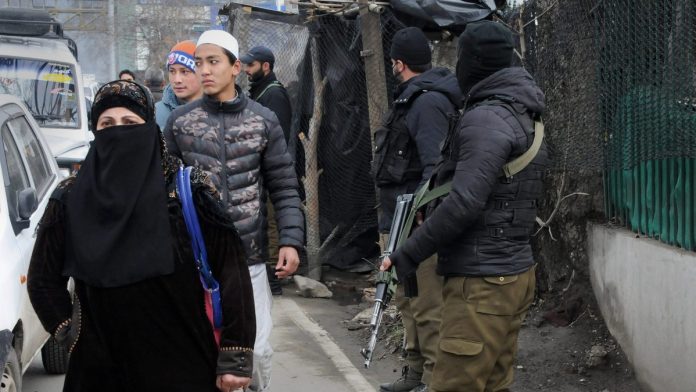 New Delhi: Muslim representation in Indian police has “remained consistently low” at 3 to 4 per cent, a study by Tata Trusts, the philanthropist arm of Tata Group, has found.

According to the Trusts’ ‘India Justice Report’, the number stood at 8 per cent even for Jammu and Kashmir, India’s lone Muslim-majority state that was bifurcated into two union territories last month.

The report notes that most states fall short of fulfilling quota requirements for the Scheduled Castes (SCs), Scheduled Tribes (STs) and the Other Backward Classes (OBCs) at the level of police officers.

Karnataka, the report states, is the only state to have “very nearly” filled officer-level quotas in all caste categories.

The study is an initiative of Tata Trusts in collaboration with NGOs Centre for Social Justice, Common Cause, Daksh and Commonwealth Human Rights Initiative, along with Prayas, a Tata Institute of Social Sciences (TISS) initiative to help undertrials, and thinktank Vidhi Centre for Legal Policy.

While the report makes observations about all states and union territories, the rankings for justice delivery capacity only accounts for 18 large and mid-sized states, where “90 per cent of India’s population lives”, and seven small ones. Information is drawn from government data to assess trends on police, prisons, judiciary and legal aid across India.

However, the report does not use a single baseline, instead relying on the date for which latest data is available under each sub-head — for police, it is 1 January 2017, prisons 31 December 2016, 2018 for the judiciary, and January 2019 for legal aid.

Overall, the report identifies Uttar Pradesh as having the worst justice delivery system among large states, and Maharashtra as the best. Kerala, Tamil Nadu, Punjab and Haryana follow Maharashtra in the latter category.

At 18 per cent and 15 per cent, Chandigarh and Dadra and Nagar Haveli, respectively, have the highest share of women in their police force. Tamil Nadu, where women comprise 13 per cent of the police force, is the top ranker among states, followed by Himachal Pradesh and Maharashtra, both with 12 per cent.

Another notable finding of the report is that 47,557 police personnel are deployed to protect 14,841 VIPs. This conclusion is based on 2012 data from the Bureau of Police Research and Development (BPR&D).

India, the study found, also has the lowest incarceration rate (number of prisoners per 1 lakh population) in South Asia. Thirty-three of every 1 lakh Indians are in prison, a far cry from the figure for India’s BRICS partners Brazil and Russia, which clock in at 301 and 445, respectively. The US has an incarceration rate of 698.

The study suggests some startling findings about the Indian judiciary. For example, it states that there is just one subordinate court (district court, sessions court) judge for every 50,000 people in 27 states and union territories.

In Uttar Pradesh, Bihar, West Bengal, and Andhra Pradesh, this ratio exceeds one judge for every 1 lakh people. Delhi and Chandigarh have been adjudged marginally better, with one subordinate court judge for every 35,000 people.

The report, however, cautions, “A simple judge to population formula tempts the conclusion that fewer judges means longer waits and higher arrears, but no direct causality can be readily drawn between the two.”

In 21 states/UTs, the report claims, a case is pending for five years or more. The numbers vary greatly within the group, with cases in Gujarat’s subordinate courts remaining pending for up to 9.5 years on average, the report adds.

At the high court level, the study says, cases in Uttar Pradesh were found to be pending for the longest, at 4.3 years, while the wait is less than half, 1.7 years, in Uttarakhand.

Ratan Tata, the chairman of Tata Trusts, is among the distinguished founder-investors of ThePrint. Please click here for details on investors.

But the news media is in a crisis of its own. There have been brutal layoffs and pay-cuts. The best of journalism is shrinking, yielding to crude prime-time spectacle. The Print

Pakistan wants to live in peace with India: FM Qureshi