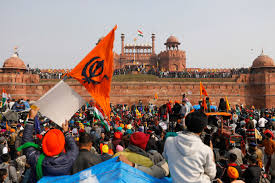 An NGO in Punjab has claimed that over 100 farmer protesters from the state have gone missing after participating in the tractor rally in Delhi on January 26.

Days after hundreds of protesting farmers marched into New Delhi while participating in the ‘Kisan Gantantra Parade’ on Republic Day, over 100 protesting farmers have reportedly gone missing from various parts of Punjab, claimed an NGO.

The Punjab Human Rights Organisation recently said that over 100 protesters, who had participated in the Republic Day tractor parade, have gone missing. It said that 12 farmers from Tatariewala village of Moga were reported missing on January 26.

Various organisations including Delhi Sikh Gurdwara Management Committee, Khalra Mission, Panthi Talmel Sangathan besides the Punjab Human Rights Organisation have announced free legal aid to those arrested by the Delhi Police in connection with the violence.

The Delhi Police has arrested 18 protesters so far in connection with the violence at the Red Fort. A case was registered against them with Paschim

Seven out of 18 arrested protesters belong to Bangi Nihal Singh village under Talwandi Sabo subdivision of Bathinda district in Punjab.

These arrested farmers had left their village on January 23 on two tractors to take part in farmers’ tractor march held on January 26 on the occasion of Republic Day.
The president of the Delhi Sikh Gurdwara Management Committee, Manjinder Singh Sirsa, said 11 protesters from Moga were arrested by Nangloi police. They have been sent to Tihar jail now.

Sources said that arrests were also made in Alipur and Narela areas.

Most of them were booked under the Damage to Public Property Act, the Ancient Monuments and Archaeological Sites and Remains Act and the Epidemic Diseases Act.ADVERTISEMENT

Internet Suspended For 2 Days At Delhi’s Borders Amid Farmers’...