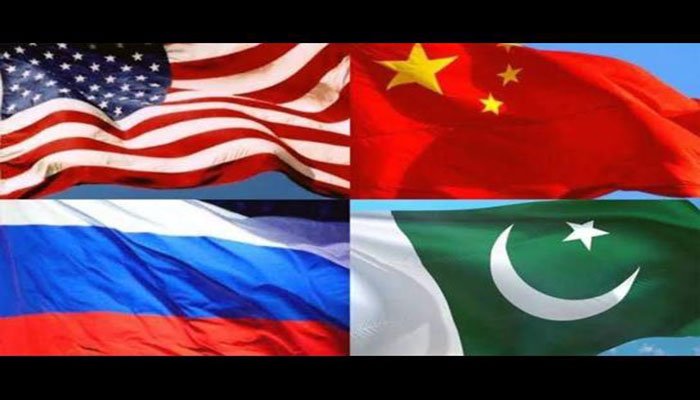 ISLAMABAD: Pakistan along with the United States, Russia and China have called upon all Afghans, including the government of the Islamic Republic and the Taliban, to ensure that terrorist groups and individuals do not use the Afghan soil to threaten the security of any other country.

For too long now, Pakistan has been at the receiving end of several militant groups based inside Afghanistan, including the TTP who continue to attack it from safe havens next door. The call from these countries came in a joint statement on the occasion of the Extended Troika on Peaceful Settlement in Afghanistan, meeting in Moscow.

The statement revealed that before Moscow, the “Troika” meetings were held on March 22, April 25, July 11, and October 25, 2019. Ambassador Mohammad Sadiq, Special Representative for Afghanistan, represented Pakistan.

The meeting focused on making progress in the intra-Afghan process to reach a negotiated settlement and permanent and comprehensive ceasefire. The event was also attended by representatives of the Afghan government, Afghanistan’s High Council for National Reconciliation, prominent Afghan political figures, and representatives of the Taliban movement, as well as Qatar and Turkey as guests of honour.

Immediately after the release of the joint statement from Moscow, Foreign Minister Shah Mehmood Qureshi and his Afghan counterpart Hanif Atmar held a telephonic conversation in which Qureshi reiterated Pakistan’s consistent support to the Afghan peace process, while underlying that the intra-Afghan negotiations provided historic opportunity to achieve an inclusive, broad-based and comprehensive political settlement in Afghanistan.

A clear message has been given to the Taliban that as stated in the UNSC resolution2513 (2020), the Troika does not support the restoration of the Islamic Emirate and called on the Government of the Islamic Republic and the High Council for National Reconciliation to engage openly with their Taliban counterparts regarding a negotiated settlement.

“We reaffirm that any peace agreement must include protections for the rights of all Afghans, including women, men, children, victims of war, and minorities, and should respond to the strong desire of all Afghans for economic, social and political development including the rule of law,” said the joint statement with these demands addressed specifically to the Taliban.

While the Taliban have been carrying out attacks throughout the year, the joint statement called on all parties to the conflict in Afghanistan to reduce the level of violence in the country and on the Taliban not to pursue a spring offensive, so as to avoid further casualties and to create an environment conducive to reaching a negotiated political settlement.

The Troika says it will encourage all concerned countries to support the Afghan people and contribute to a lasting peace in the interest of all. “We reaffirm our commitment to mobilise international political and economic support for a post-political settlement Afghanistan,” said the statement.

Participants in the intra-Afghan negotiations have been asked to engage immediately in discussions on fundamental issues to resolve the conflict, including the foundations of the future peaceful and stable Afghan state, the content of a political roadmap leading to an inclusive government, and the modalities of a permanent and comprehensive ceasefire.

“At this pivotal moment, our four states call on the parties to negotiate and conclude a peace agreement that will bring an end to over four decades of war in Afghanistan,” said the Troika. Meanwhile, in an unrelated issue, Foreign Minister Qureshi in his telephone talks with UN Secretary General Antonio Guterres lauded his leadership during challenging times, and welcomed his availability to serve a second term in office, and expressed Pakistan’s full support for Guterres’s re-appointment for another five-year tenure.