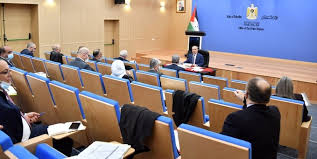 In a statement, Ishtaye said that he held a telephone conversation with Wennesland, the Special Coordinator for Middle East Peace Process, and expressed the Palestinian side’s openness to any political process sponsored by the Quartet, reports Xinhua news agency.

The Quartet comprises the US, the UN, Russia and the European Union.

Ishtaye said that he discussed with Wennesland moving a political path based on international legitimacy and international law under the Quartet’s auspices and with the participation of various powers in a multi-international framework.

Meanwhile, the Prime Minister said that he briefed Wennesland on the preparations for holding the general elections in the Palestinian territories starting from May 22.

He called on the UN to exert every possible effort to facilitate holding the Palestinian elections and pressure Israel to allow holding them in East Jerusalem.

The Israeli-Palestinian peace process has stalled since 2014, after rounds of US-sponsored talks failed to produce a breakthrough.

Palestine has cut off ties with the US government which under formrt President Donald Trump, who recognized the disputed holy city of Jerusalem as Israeli capital in 2017, and relocated the American embassy in Israel to the city in May 2018.business.standard.com