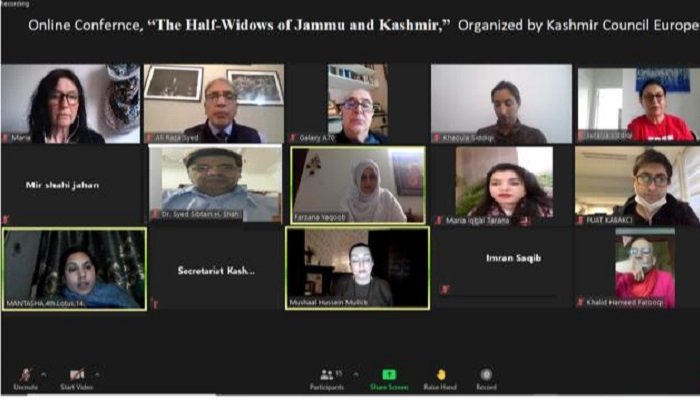 Islamabad: The woes of Kashmiri ‘half-widows’ is a very serious issue and should be immediately addressed.

These comments were made by the former Azad Kashmir Minister Farzana Yaqub at an online conference titled “The half-widows of Jammu and Kashmir”.

The conference was moderated by prominent peace activist Marijan Lucas from the Netherlands and Ali Raza Syed who is the chairman of Kashmir council EU.

The term “half-widow” is used for Kashmiri women whose husbands have disappeared and still missing during the ongoing conflict in Kashmir.  These women are called “half-widows” because they have no idea whether their husbands are dead or alive.

This was the 8th edition of the conference which is being organised since 2014.

Prominent women’s rights activists of Kashmiri origin, living in different parts of the world as well as in IoK and Azad Kashmir, addressed the conference.

Mashal Malik, the head of the Peace and Culture Organisation, said that women in Occupied Kashmir were facing a lot of hardships.

Meanwhile, Assabah Khan from Srinagar, who is a human rights activist for the last 20 years, narrated her story. Khan’s husband, Farooq Ahmed Dar, is in an Indian jail. She also mentioned the names of some women in the occupied valley who are fighting for the release of their loved ones.

Assabah also highlighted that in an alarming sign, there are currently 18,000 Kashmiri children in Indian jails whose mothers are worried.

Lamenting the ineffectiveness of international aid regarding the issue of half-widows, former Azad Kashmir minister said that women do not know if their spouses are alive or dead. “She cannot remarry, nor can she divide her husband’s property,” she added.

Efforts should be made at the international level to alleviate the plight of the people of Occupied Kashmir, especially women, she underscored.

Meanwhile, Hawala Siddiqui from Canada, the co-founder of the Silk Organisation, said that people should highlight the issues of women in Occupied Kashmir, especially sexual violence against them, through social media.

“We need to highlight the suffering of these women so that their voices can reach the world,” she stressed.

Over 10,000 Kashmiri men have been missing and their wives, mothers, and sisters were still waiting because they did not know if they were dead or alive, Hawala said.

Suraya Siddiqui, another Kashmiri woman from Canada, also stressed the need for global action against violence against Kashmiri women.

Meanwhile, Maria Iqbal Tarana, the Executive Director of Youth Forum Azad Kashmir, noted that apart from the women of Occupied Kashmir, children are also being subjected to brutal Indian attacks at the Line of Control (LoC).

BJP has sown the seeds of hatred in multicultural India:...