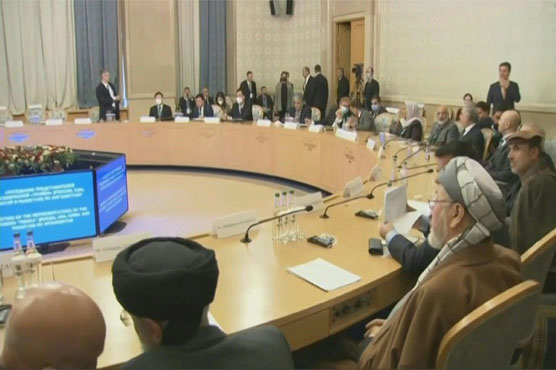 Moscow: Russia urged Afghan officials and the Taliban during talks in Moscow to reach an accord to end years of violence ahead of a deadline for US troops to withdraw from Afghanistan.

The conference in Moscow is part of intensifying negotiations between the Afghan government, the Taliban and the United States in Qatar to negotiate Washington s exit nearly 20 years after US troops invaded the country in response to the September 11 attacks.

The United States is supposed to complete a withdrawal of its military from Afghanistan by May 1 as part of a deal with the Taliban — a deadline US President Joe Biden said Wednesday would be “tough” to meet.

Washington also wants to jump-start the peace process and get the Taliban and Afghan government to agree to some form of power-sharing.

The Kremlin, which pulled Soviet troops from Afghanistan in 1989 after a bruising occupation, last week threw its weight behind Washington s initiative for an interim government that included the Taliban.

Taliban co-founder and deputy leader Mullah Abdul Ghani Baradar told the Moscow conference that Afghans “should be left to decide their own fate”, a Taliban spokesman said.

“The world should take into account the Islamic values, independence and national interests of the Afghan people,” the spokesman said in a tweeted summary of Baradar s speech, given behind closed doors.

In a show of support for the international efforts, the head of the Afghan government s reconciliation council, Abdullah Abdullah, said Kabul wanted to speed up negotiations and for “the two sides to start their talks and discussions in a different atmosphere”.

Gulbuddin Hekmatyar — a famed anti-Soviet commander in the 1980s who joined the government s delegation to Moscow — said Thursday s talks had broken the “stalemate” in Doha, according to his spokesman.

The so-called “butcher of Kabul”, who was accused of killing thousands of people in the capital during the country s bloody civil war in the 1990s, was seen casually lunching with leading members of the Taliban negotiating team.

The visiting Afghan delegation included a large spectrum of personalities from the past four years of conflict, including members of the current negotiation team in Doha, a former president and two warlords accused of grave war crimes.

Negotiations to end the conflict initiated in Qatar last September have made little progress and their outcome is uncertain.

Meanwhile urban centres in Afghanistan are in the grip of a bloody campaign in the form of attacks targeting politicians, civil servants, academics, rights activists and journalists.

Afghan President Ashraf Ghani said Thursday that a military helicopter that crashed in the volatile Wardak province had been shot down, killing four crew and five members of the security forces.

“The perpetrators of the incident will be seriously punished,” he said at a ceremony at the presidential palace.

The United States, despite tensions with Russia, has welcomed Moscow s role and also consulted fellow rival China as diplomacy steps up.

Pakistan — which holds the most outside influence over the Taliban — is also represented in Moscow.

Analysts have said the Moscow conference is largely a curtain-raiser for an even bigger gathering to be held in Turkey next month. AFP

BJP has sown the seeds of hatred in multicultural India:...