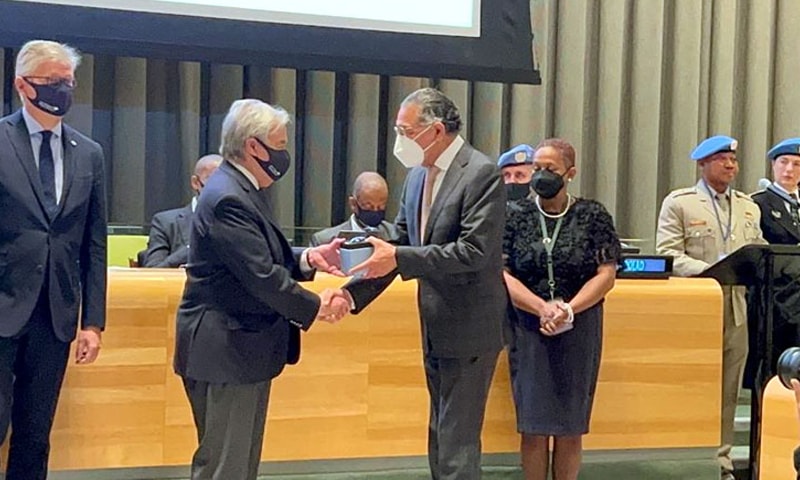 United Nations: Six Pakistanis were among 117 UN peacekeepers who were awarded UN medals of courage for sacrificing their lives for the cause of peace.

Five of the six — Tahir Ikram, Tahir Mehmood, Mohammed Naeem, Adil Jan and Mohammed Shafiq — were from the armed forces, while the sixth, Ibrar Syed, was a civilian.

At the UN Headquarters, Secretary-General António Guterres laid a wreath to honour the nearly 4,200 United Nations peacekeepers who have lost their lives since 1948. And later, he presided over a ceremony at which the Dag Hammarskjöld Medals of Courage were awarded posthumously to 117 military, police and civilian peacekeepers, including six Pakistanis, who lost their lives serving under the United Nations flag in 2021.

“We are committed to helping the vulnerable communities affected by conflict and will continue to adapt to the changing environment and needs of the peacekeeping operations,” said Pakistan’s UN Ambassador Munir Akram.

Recognising the sacrifices of the six Pakistanis who lost their lives in 2021, Ambassador Akram said: “We share the grief of their families and will never forget these heroes who won respect and recognition for their homeland.”

The UN secretary-general recalled that so far more than one million women and men had served as UN peacekeepers since 1948. “We are reminded of an age-old truth: peace can never be taken for granted. Peace is the prize,” he said. AFP

EU urged to act over Bulgarian pushbacks of asylum seekers

A look at Queen Elizabeth II’s style through the decades