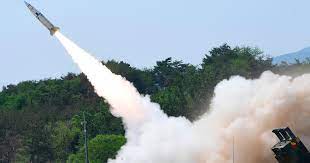 Pyongyang: South Korean military says the action is a demonstration of the allies readiness to respond to North Korean ‘provocations’.

A missile is fired during a joint training between US and South Korea at an undisclosed location in South Korea.

South Korea and the United States have condemned North Korea’s latest missile launches, firing eight ballistic missiles of their own in a show of force aimed at demonstrating the two allies’ readiness to respond to Pyongyang’s “provocations”.

The launches early on Monday came a day after North Korea fired eight short-range ballistic missiles towards the sea off its east coast, in what analysts said was the largest single test ever by the nuclear-armed country.

In a statement, the South Korean Joint Chiefs of Staff (JCS) said the allies launched eight ballistic missiles into the East Sea starting at 4:45am local time (19:45 GMT on Sunday) for about 10 minutes.

The action was a demonstration of “the capability and readiness to launch immediate precision strikes on the origins of provocations and their command and support forces”, the JCS said.

“Our military strongly condemns the North’s series of ballistic missile provocations and seriously urges it to immediately stop acts that raise military tensions on the peninsula and add to security concerns,” it added.