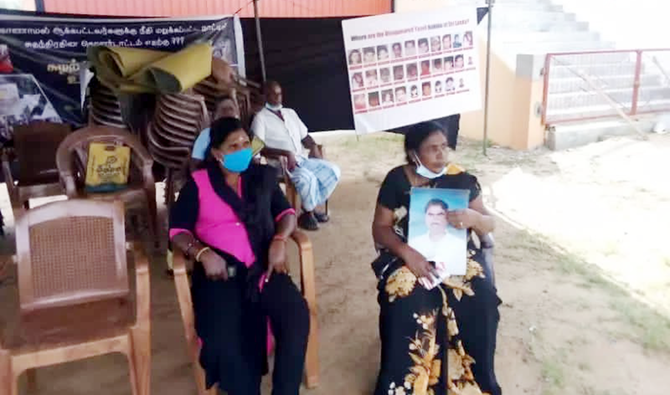 But even today, the 63-year-old mother of four continues to wait for her eldest child to return home.

“There is no closure,” she told Arab News on Sunday, nearly a week after the UN Human Rights Council (UNHRC) received a mandate to collect evidence of crimes committed during Sri Lanka’s 26-year-old conflict, which began in 1983 and is among the world’s longest-running and bloodiest wars.

According to UN estimates, between 80,000 and 100,000 people died during brutal clashes between the government and the separatist Tamil Tigers or the Liberation Tigers of Tamil Eelam (LTTE).

The LTTE’s campaign was to carve out a separate state for the Tamil minority, who they said were being discriminated against by the majority Sinhalese on the island.

The war ended in 2009, but not before hundreds of thousands lost their lives and countless others went missing.

“One night, the police came to my house and took him. He was only 24,” Udayachandra, who hails from the Tamil community, told Arab News, recalling the last time she saw her son more than a decade ago.

“His disappearance has been everlasting agony. We have tried our best to track him, but all efforts were in vain,” she added.

Udayachandra is not alone. Suba Letchumi, 65, also lost her 19-year-old son during the ethnic war.

“I have combed all parts of the island in search of my son and have gone to more than 50 government departments to find out what really happened to him,” Letchumi, a Tamil resident of Mannar district, told Arab News.

However, the UNHRC’s move to reopen case files and collect evidence to probe new ones has renewed hope for several war victims and their families on the island nation.

The resolution was passed on Tuesday after UN High Commissioner for Human Rights Michelle Bachelet warned that Sri Lanka could “rapidly descend into violence unless decisive international action was taken.”

Last month, Bachelet told the UNHCR that the island nation had “closed the door” on ending impunity for past abuses before expressing alarm over “worrying trends” in the country since President Gotabaya Rajapaksa assumed office in 2019.

Tuesday’s resolution, spearheaded by the UK, gives Bachelet’s office new staff, powers and a $2.8 million budget to look at Sri Lanka’s war, with a view to future prosecutions with immediate effect, according to Reuters.

Former politicians and lawmakers hailed the resolution as a “great triumph for minorities in Sri Lanka.”

“They were harassed and have suffered for years,” opposition Parliamentarian Sanakiyan Rasamanickam, who represents the Tamil-dominated Eastern Province, told Arab News.

Two weeks ago, he led a group of protesters during a 300-mile campaign from Pottuvil in the east to Point Pedro in the north to seek justice for oppressed minorities on the island, “particularly Muslims who are being forced to cremate relatives who died from the coronavirus disease (COVID-19).”

Rasamanickam believes that anger over the forced cremations and the government’s proposal to impose a burqa ban on Muslim women has provoked the world community “to go against Sri Lanka.”

“This should be an eye-opener for Sri Lanka to mend its ways and stop harassing minorities,” he told Arab News.

The UN vote was 22 in favor, with 11 against it, including China and Pakistan. India and 13 other countries abstained from taking part in the process.

In comments to reporters soon after the vote, Sri Lanka’s Foreign Minister Dinesh Gunawardena said that the government “would not give in to the unfair pressure” brought by the UNHRC resolution and would “continue to conduct a domestic probe into allegations of human rights violations” in Sri Lanka.

Rights groups and activists, however, welcomed the UN’s initiative.

“The UN’s decision to collect evidence of crimes during the war gives us relief that future harassments will not happen and that UN interference will keep the government under check,” Yardson Figurado, a human rights activist from the Mannar Social and Economic Development Organization, told Arab News on Sunday.

However, he was quick to add a caveat: India should have voted too, especially since it has “eight crores (80 million) Tamils” living in its territory.

In 1991, nearly a decade after the civil war had begun, an LTTE suicide bomber assassinated then Indian Prime Minister Rajiv Gandhi in an apparent act of revenge for sending Indian peacekeeping troops to fight against the rebels.

Figurado said he was “thoroughly disappointed that India abstained from voting,” considering its large Tamil population.

He added that Sri Lankan Tamils had treated India as “their partner in distress, but it has let them down badly with this move.”

Meanwhile, senior journalist and political analyst Ameen Izzadeen believes that Sri Lanka’s image on the international stage had been “tarnished” by the UN’s move.

“Sri Lanka understands the consequences of non-compliance even though the resolution is non-binding,” he told Arab News on Sunday.

“Some Western powers and their allies may impose targeted sanctions. Sri Lanka is counting heavily on China and Russia to overcome the challenge. Since geopolitics are also involved, it may get some space to maneuver its way out of the crisis,” he added.

Dr. Dayan Jayatilake, Sri Lanka’s former representative to the UN, agreed, adding: “It is up to the Sri Lankan government to cooperate with the UNHRC and face its consequences.

“If the government takes a tough line against the resolution, it may have to bear the brunt of the actions taken by some UN member countries,” he told Arab News on Sunday.

According to sources who requested anonymity as they were not authorized to speak to the media, the resolution is unlikely to have an immediate impact on Sri Lanka but “could affect trade with some countries and impose travel restrictions on some officials” in the long run.

Still, it offers little respite to families of war victims. For Udayachandra, it means an eternal wait.

“We do not know how much the UN move will help us find our dear ones who are still missing after so many years. We do not know when that wait will be over.” Arab News

Progress on UN action for peacekeeping