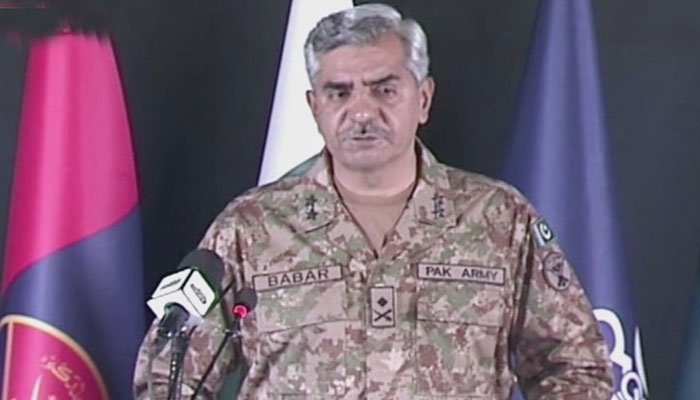 The military spokesperson spoke to the media on the fourth anniversary on the launch of Operation Raddul Fasaad. Maj Gen Babar Iftikhar shared the details about the dividends earned through the operation that was launched on February 22, 2017 by the army under COAS General Qamar Javed Bajwa.

The operation was launched to indiscriminately eliminate the “residual/latent threat of terrorism”, consolidating the gains made in other military operations, and further ensuring the security of Pakistan’s borders, according to a statement issued by the military.

He said the strategic intent of Raddul Fasaad was, and is, a peaceful, stable and normalised Pakistan where people’s confidence in the state is restored and terrorists and extremists are rendered completely ineffective by curtailing their freedom of action.

“While armed forces fight terrorists. Terrorism and extremism can only be defeated by civil law enforcement agencies and society as a whole. That’s how we look at it,” said Maj Gen Iftikhar.

While explaining the operation, the military’s spokespersons aid that “every Pakistani” was a soldier of the operation under the “whole of nation approach”.

He also explained the reasoning behind the operationg, saying that it was launched at a time when the terrorists after seeing the destruction of their infrastructure in tribal areas and facing heavy losses after different operations tried to take refuge in different areas of Pakistan

Maj Gen Iftikhar said that considering such situation the operation was launched was launched under a “two-pronged strategy”.

“One prong focused on counter terrorism and the other focused on violent extremism,” said the DG ISPR.

The head of the military’s media wing while speaking about the strategy said that the counter terrorism aspect of the strategy focused had a few “cardinals”.

He explained that the few cardinals was that “violence can only be used by the state”, making the western zone of the country stable with proper border management system and finishing the support base of terrorists.

Speaking about the counter violent extremism strategy, the DG ISPR said: “One thing is clear that an ideology can be countered can only be countered by a superior ideology or superior argument as we say.”

He added that within this context the strategy was to take part in the implementation of the National Action Plan, inclusion of tribal areas in national mainstream, and controlling extremism by taking part in government’s reforms of police, education, madrassahs. Dunya