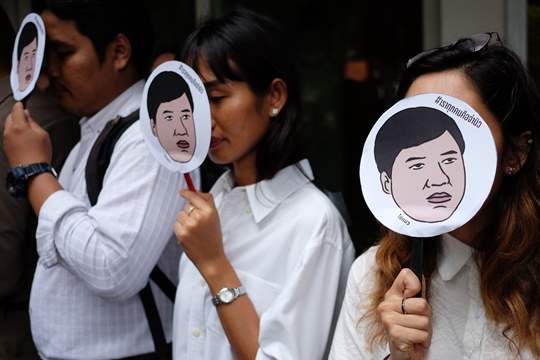 The Thai authorities’ adoption of a draft law to regulate non-profit groups would strike a severe blow to human rights in Thailand, several international organizations said today. The bill is the latest effort by the Thai government to pass repressive legislation to muzzle civil society groups and non-governmental organizations (NGOs).

The “Draft Act on the Operations of Not-for-Profit Organizations” contains provisions that would have a deeply damaging impact on those joining together to advocate for human rights in the country, in violation of their right to freedom of association and other rights. The Thai government provided a perfunctory and inadequate consultation process for the bill. Because of fundamental problems in the draft law, the authorities should withdraw the draft entirely and ensure that any future law regulating NGOs strictly adheres to international human rights law and standards, the organizations said.

“This draft law poses an existential threat to both established human rights organizations and grassroots community groups alike. If enacted, this law would strike a severe blow to human rights by giving the government the arbitrary power to ban groups and criminalize individuals it doesn’t like,” said Maria Chin Abdullah, member of ASEAN Parliamentarians for Human Rights (APHR) and a Malaysian Member of Parliament (MP).

“This draft blatantly breaches Thailand’s own constitution and its human rights obligations. A thriving, independent and free civil society is an essential component of a rights-respecting, open society. The authorities should withdraw this deeply flawed draft and go back to the drawing board,” said Brad Adams, Director of Human Rights Watch’s Asia Division.

According to the Draft Act (in Section 3), the government would have wide discretion as to which organizations will be exempted from the application of the law.

The Draft Act (in Section 4) also uses an overbroad definition of not-for-profit organizations (NPO), which has left it open to abusive and arbitrary application by the authorities.

The broad terms of the Draft Act would allow unequal treatment of certain disfavoured groups and carry dire consequences for associations critical of the government, with little scope to legally challenge government decisions. Groups as varied as academic institutions, community groups, sports associations, art galleries and ad hoc disaster relief collectives could be deemed to be NPOs and therefore be subject to the law’s mandatory registration requirement and potential criminal prosecution. The vague and overbroad definition of ‘not-for-profit organizations’ amounts to a violation of the “legality” principle, which requires any restriction to freedom of association and other fundamental freedoms be clearly “prescribed by law”.

Registered and unregistered groups alike must be allowed to function freely and be able to enjoy the right to freedom of association on equal terms. In order to enable individuals to exercise their right to freedom of association, States need to provide a simple, accessible, non-burdensome and non-discriminatory notification process for organizations to obtain their registration and must not require the authorities’ prior authorization.

“The draft law’s broad terms could be applied against virtually any group, no matter how small or informal,” said David Diaz-Jogeix, Senior Director of Programmes at ARTICLE 19. “If passed in its current form, the draft law will likely cause entire sectors of Thai civil society to collapse or take their activities underground.”

“Those found in breach of this law’s many faulty provisions risk lengthy prison sentences. Targetted NGOs could have their very existence extinguished at the whim of governmental authorities – enabling the silencing of critical and independent voices in Thailand,” said Ian Seiderman, Legal and Policy Director at the International Commission of Jurists (ICJ).

By making the registration of an NPO mandatory (in Section 5) and rendering any unregistered group illegal, the Draft Act would violate the right to freedom of association and severely impede the work of groups that defend and promote human rights.

Notably, under the proposed law (in Section 10), anyone found to belong to an unregistered association that operates within Thailand could be jailed for up to five years, fined up to 100,000 THB (approx. 3,200 USD), or both. This would effectively criminalize people solely for their peaceful exercise of the right to freedom of association.

“Around the world, bogus claims regarding foreign funding for NGOs are constantly used by repressive governments to distract from their own human rights record and to stigmatize and fuel paranoia regarding those who speak truth to power – often simply because they are critical of the government,” said Shamini Darshni Kaliemuthu, FORUM-ASIA’s Executive Director. “Now Thailand seems to want to follow suit, adding itself to an unwelcome list of rights-abusing governments trying to control or severely limit NGO funding.”

The Draft Act (in Section 6) places discriminatory restrictions on organizations that receive foreign funding. Authorities have the sole discretion to determine which activities may be carried out using funds from foreign or international sources, leaving ample room for abuse.

Moreover, the Draft Act states as a rationale for enacting the law: “several [NPOs] accepted money [from foreign sources], and used them to fund activities that may affect the relationship between the Kingdom of Thailand and its neighboring countries, or public order within the Kingdom.” This justification stigmatizes organizations that  use foreign funding by equating their objectives to those of “foreign agents”. The government has failed to recognize the legitimate work carried out by organizations and their contribution to the rule of law and development of the country, merely because they are funded by foreign sources.

“In addition to the ongoing criminalization of online expression in Thailand, the Draft Act gives sweeping, unchecked and discretionary administrative powers to the authorities to further obstruct the work of human rights organizations,” said Emerlynne Gil, Amnesty International’s Deputy Regional Director for Research.

The Draft Act not only confers the power to the authorities to closely scrutinize organizations, it also contains provisions to subject NPOs’ offices and members to invasive surveillance and searches without judicial oversight. The Draft Act (in Section 6) allows the authorities to enter civil society organizations’ offices and make copies of their electronic communications traffic data without prior notice or a court warrant. This is a serious threat to the right to privacy and to freely express the ideas and opinions of its members.

Without prior notice or a valid warrant, this arbitrary power clearly violates domestic and international standards on due process of law.

“In going down this route, Thailand stands to poison the space for civil society. The passage of this law would severely undercut Thailand’s claims to be a rights-respecting country with a flourishing civil society,” said David Kode, Advocacy and Campaigns Lead at CIVICUS.

The Draft Act is currently under consideration by Thailand’s Office of the Council of State. Public consultation was carried out by the Office between 12 and 31 March 2021. The draft law will then be resubmitted to the Cabinet, then presented to the Parliament.

On 26 March 2021, three UN Special Rapporteurs (on the rights to freedom of peaceful assembly and of association; the promotion and protection of the right to freedom of opinion and expression; and on the situation of human rights defenders) sent a communication to the Royal Thai Government raising their concerns about the Draft Act.

The right to freedom of association is guaranteed in the International Covenant on Civil and Political Rights (ICCPR) and Section 42 of the Constitution of the Kingdom of Thailand.

The UN Declaration on Human Rights Defenders, adopted by the UN General Assembly with the consensus of Thailand and all other States, guarantees the rights of individuals to form, join and participate in civil society organizations, associations or groups to promote or defend human rights, a key component of the right to association.

It also articulates civil society organizations must be able to freely exercise the rights to association and expression, including through activities such as seeking, obtaining and disseminating ideas and information; advocating for human rights; engaging in governance and the conduct of public affairs; accessing and communicating with international human rights bodies; and submitting proposals for policy and legislative reform at the local, national and international levels.

The UN Special Rapporteur on the right to freedom of peaceful assembly and of association has similarly emphasized that associations should enjoy the rights to express an opinion, disseminate information, engage with the public, and advocate before governments and international bodies for human rights. Amnesty International

Saudi Arabia’s scramble for an exit strategy in Yemen