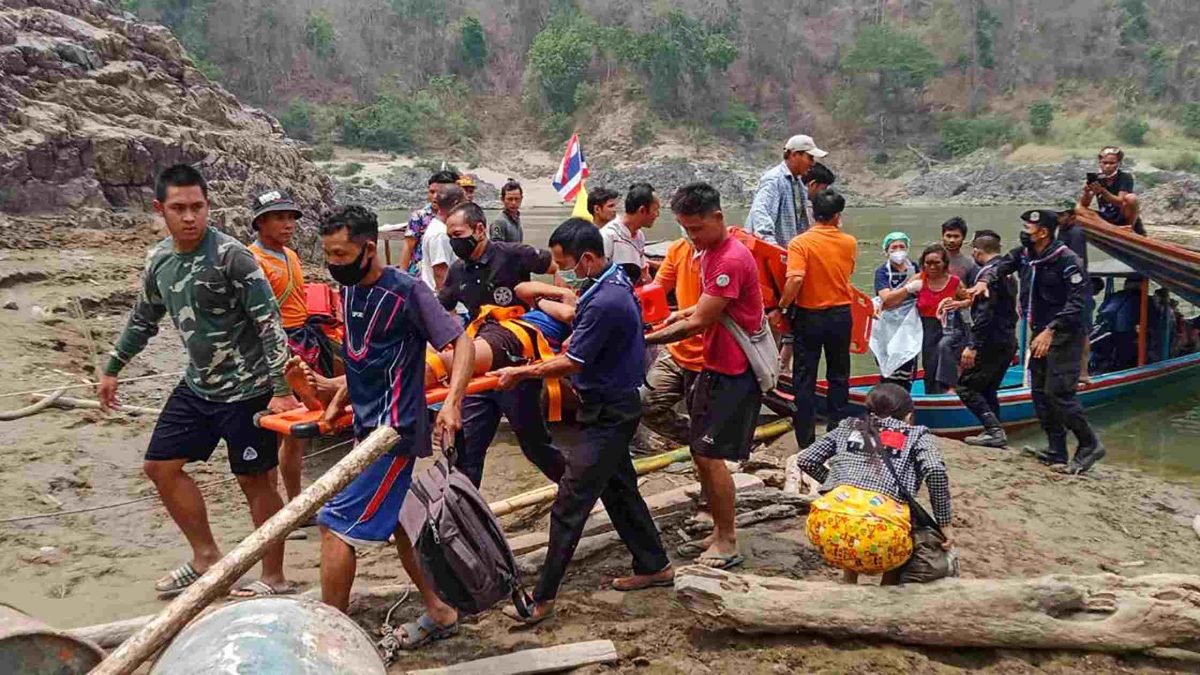 Karen: Civilians wounded in Myanmar airstrikes on rebel positions spoke of their terrifying ordeal after trekking through the jungle to seek medical treatment across the border in Thailand.

Military jets hit targets in eastern Karen state as Myanmar reeled from the deadliest day so far in the junta’s crackdown on anti-coup protests.

Chin Refugees from Myanmar living in India hold a candle vigil to pay tribute to the people who died after the military coup in Myanmar.

The strikes targeted territory held by the Karen National Union (KNU), one of the nation’s largest ethnic armed groups, which had earlier seized a military base.

They marked the Myanmar military’s first use of airstrikes against the KNU in 20 years and sent around 7,000 Karen villagers fleeing for safety, according to the armed group.

Naw Eh Tah, one of a handful who managed to cross the Salween River, which marks the border with Thailand, on Tuesday to seek medical treatment, described the moment the bombs hit.

Injured Karen villagers arrive in Thailand after crossing the border on 30 March 2021. Thousands of villagers from Myanmar’s Karen state fled for refuge.

“We didn’t hear the plane, if we did, we would have run,” the 18-year-old told AFP at the small Sop Moei district hospital in Thailand’s northern Mae Hong Son province.

“By the time I realised what was happening, the explosion hit the roof of my house.

Her legs lacerated by shrapnel, Naw Eh Tah trekked for a day through dense tropical jungle to the river.

“We crossed because I can’t stay, the Myanmar army are all trying to get us,” she said.

“I have never seen it (air strikes) before. I am so afraid.”

The youngest to cross a 15-year-old, was also the most seriously hurt with a broken rib and collapsed lung.

Some of the thousands of Karen villagers forced flee #Myanmar army air strikes shelter in the jungle on the Thai border.

Saw Lab Bray, 48, suffered shrapnel wounds all over his body when he was hit in KNU stronghold Day Puh Noh.

“I tried to run away but the bombs dropped so quickly,” he told AFP from a hospital wheelchair, describing how he saw six people wounded and a man die.

“I fell on my side and was coughing blood. I’m afraid because I cannot run, I cannot move.”

Doctor Chakri Komsakorm said the refugees looked like “they have been through war” with many shrapnel wounds becoming infected due to a lack of medicine.

He added that “many appear to have been starving for many days”.

Mr Chakri also said he had heard there were people with more serious wounds still trapped on the Myanmar side of the river, unable to cross because of the severity of their injuries.

Karen groups say as many as 3,000 people fled across the river into Thailand after the airstrikes before being sent back to Myanmar, though Thai officials insist they were not forced back.

Mae Hong Son Governor Sithichai Jindaluang told a news conference that refugees who had not been badly affected by the bombings agreed to go back when asked.

Thai Prime Minister Prayut Chan-O-Cha said they had not been “scared off with guns or sticks” and insisted the kingdom would not turn people away if the situation got worse.

The airstrikes came as the junta struggles to quell nationwide protests demanding a return to democracy and the release of civilian leader Aung San Suu Kyi, ousted in the 1 February coup.

The generals’ ruthless crackdown has left more than 500 people dead, according to a local monitoring group, triggering international outrage.sbs.com.au

A gift of chocolate from Queen Victoria, intact after 121...