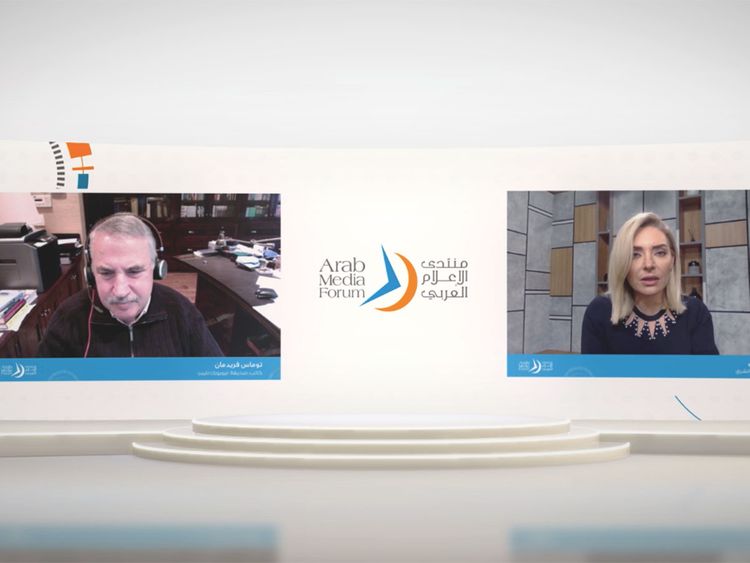 Dubai: American political commentator, author and three-time Pulitzer Prize winner Thomas Friedman said the recent UAE-Israel peace agreement has created a new model that “may give rise to new aspirations for the people of the Middle East and a shift from old ideologies and political strategies in the region.”

Friedman, a columnist for the New York Times, made the comment during a virtual session at the 19th Arab Media Forum. He discussed the prospects for peace in the Middle East and the impact of the UAE, Bahrain and Sudan’s agreements with Israel to promote stability in the region.

“The UAE paved the way and created the model,” Friedman said in a discussion moderated by journalist and TV presenter Zeina Yazigi. “People saw a really successful Arab state get together with a really successful non-Arab state and if you’re in Beirut right now and … you see successful states getting together … you’re saying why am I not part of that,” he explained.

Friedman spoke candidly and noted: “I think there’s a new mood in there and the UAE-Israel deal unlocked a lot of that. People on the street actually want to be part of the world. They’re tired of the old games. Abu Mazen (Mahmoud Abbas, president of the State of Palestine and Palestinian National Authority) has to wake up to that and so do the Iranians,” he added.

Friedman noted the US is likely to drift towards amplifying positive developments arising from within the region rather than resorting to intervention and regime change. “One thing that we have learned in the last 20 years in the Middle East is that the opposite of autocracy is not democracy, it is actually disorder. The Middle East only puts a smile on your face when it starts with the parties out there because that meant it was in their own interests, it was self-sustaining. I see America much more in an amplification role rather than one stomping around diplomatically or militarily,” he explained.

With regards to outgoing US President Donal Trump, Friedman noted: “Trump created a diplomatic position we have never seen before, the ‘Son-in-Law-in-Chief’. I’m not critical of it, I’m trying to understand it. But he threw out the old playbook and created his own, which only a Son-in-Law-in-Chief could do. So, he didn’t have to worry about the State Department, the desk officer, the ambassador. That was a radically new approach,” he added.

Friedman noted that Saudi Arabia will be the “big prize “ for the peace process and achieving that may involve negotiations on several fronts. “Saudi Arabia understands that it has a problem in Washington DC going back to the Khashoggi murder and that’s not going away. It’s a big problem. At the same time, the Biden administration understands that the stability of Saudi Arabia is a huge national American interest and the natural way to close that gap would be if Saudi Arabia were to open normalised diplomatic relations with Israel.”

“To me the question is, is Saudi Arabia ready to normalise. If it is, what will it demand from Israel vis-à-vis the Palestinians by way of concessions and what will it get in Washington DC in terms of getting off the blacklist or at least reducing its isolation. It’s a three-way poker game.”

Israel, however, has also not faced up to potential internal problems that could result from these developments. “Palestinians will say eventually, well if that’s your approach, then give me a passport, give me citizenship, recognise all two and a half million of us as Palestinian citizens, and that will have huge implications for Israel as a democracy and a Jewish state,” he noted. Arab News

India farmer protests: How rural incomes have struggled to keep...

Economic and Social Council ‘vital to promote global peace and...