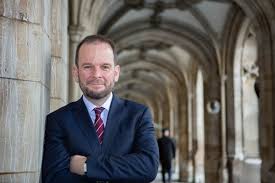 London: Member of British Parliament, James Daly in a letter to Tim Davie, Director General of BBC Broadcasting House, has expressed his gratitude and appreciation over the release of Jammu and Kashmir map depicting it as a disputed territory.

In the letter titled ‘Map of the Disputed Territory of Jammu and Kashmir’ James Daly said, “I am writing to you having been made aware of a map of India that was displayed on the BBC World Service website depicting Jammu and Kashmir as a disputed territory. I am extremely pleased that the map reflects the accurate status of the area and I hope you are able to resist any external pressure to change or amend the image, or not to reflect the disputed status of the region.”

Refuting the Indian claim that Jammu and Kashmir is its integral part, the British MP said, “It is a dispute that escalated into three wars and several other armed skirmishes between India and Pakistan. …. Suggestions that the area is anything other than disputed territory would be inaccurate, and is likely to leave the BBC open to accusations of a lack of impartiality over the conflict. It could have the potential of arousing tensions amongst Pakistani, Indian and Kashmiri diasporas here in the UK.”

“The BBC World Service does an excellent job of projecting British soft power throughout the world, and does a great deal of good internationally. It cannot be seen to be taking sides in international disputes. Therefore, I commend the accuracy of the image and I hope this remains the policy of the BBC,” the letter added.