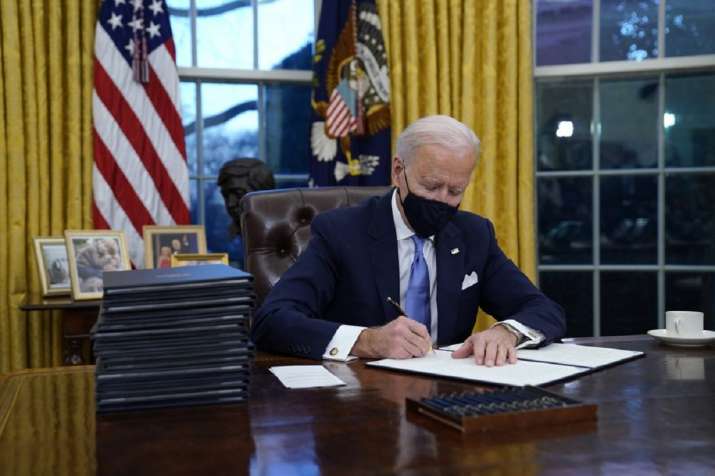 Standing on the steps of a US Capitol that was ransacked exactly two weeks earlier by pro-Trump mobs seeking to overturn his victory, Biden swore the presidential oath on a bulging century-old family Bible moments after Kamala Harris officially became America’s first woman vice president.

“Democracy is precious, democracy is fragile and at this hour, my friends, democracy has prevailed,” Biden said before a National Mall that was virtually empty due to the ultra-tight security and a raging Covid-19 pandemic that he vowed to confront swiftly.

“We must end this uncivil war that pits red against blue, rural versus urban, conservative versus liberal. We can do this if we open our souls instead of hardening our hearts, if we show a little tolerance and humility and we’re willing to stand in the other person’s shoes,” he said.

“Together we shall write an American story of hope, not fear, of unity, not division, of light, not darkness. A story of decency and dignity, love and healing and goodness.”

But Trump, who falsely said that he was cheated out of a second term and egged on his supporters before their deadly rampage at the Capitol, broke 152 years of tradition by refusing to attend his successor’s inauguration.

Biden pushed through a flurry of orders the moment he entered the White House, starting with rejoining the 2015 Paris climate accord, from which the US withdrew under Trump, an ally of the fossil fuel industry.

“We are going to combat climate change in a way we have not done so far,” the new US leader said in the Oval Office as he signed papers on the Paris deal, which was negotiated by Barack Obama when Biden was his vice president.

Biden’s spokeswoman Jen Psaki said his first call to a foreign leader would be on Friday to Canadian Prime Minister Justin Trudeau — after Biden blocked the Keystone XL pipeline fiercely opposed by environmentalists but backed by Ottawa.

Biden also halted the US exit from the World Health Organization, stopped construction of Trump’s cherished wall on the Mexican border and rescinded a ban on visitors from several Muslim-majority nations.

“As a nation built on religious freedom and tolerance, we welcome people of all faiths and those of no faith at all. It is who we are,” said the new State Department spokesman, Ned Price.

– ‘President for all Americans’ –

In his inaugural address, Biden appealed to supporters of Trump, who shattered political norms by ruthlessly belittling rivals, denouncing entire ethnic groups and trying to cast doubt on basic facts.

“I will be a president for all Americans,” the veteran Democrat said.

But Biden confronted head-on the rise of domestic extremism, as evidenced during Trump’s presidency by the Capitol assault, deadly attacks on synagogues and immigrants, and a violent march by neo-Nazis in Charlottesville, Virginia.

The United States faces “a rise of political extremism, white supremacy, domestic terrorism that we must confront, and we will defeat,” Biden said.

“Our history has been a constant struggle between the American ideal that we are all created equal and the harsh ugly reality that racism, nativism, fear and demonization have long torn us apart.”

Joe Biden is sworn in as the 46th president of the United States by Chief Justice John Roberts as Jill Biden holds the Bible during the 59th Presidential Inauguration at the US Capitol, in Washington, US, January 20, 2021. -REUTERS

At 78, Biden is the oldest-ever US president, a job he first sought in 1987, and is only the second Roman Catholic president after John F Kennedy.

Harris, the daughter of Indian and Jamaican immigrants, became the highest-ranking woman in US history, and the first Black person and first person of Asian heritage as the nation’s number two.

She and her husband Doug Emhoff — America’s first-ever “second gentleman” — were escorted to the inauguration by Eugene Goodman, a Black police officer at the Capitol who became a hero by luring away the mostly white mob away from the Senate chambers.

Thanks to the new vice president’s tie-breaking vote, the Democratic Party regained control of the Senate, which confirmed the first of Biden’s nominees, national intelligence chief Avril Haines.DW

Will work to strengthen ties with new US president: Munir...