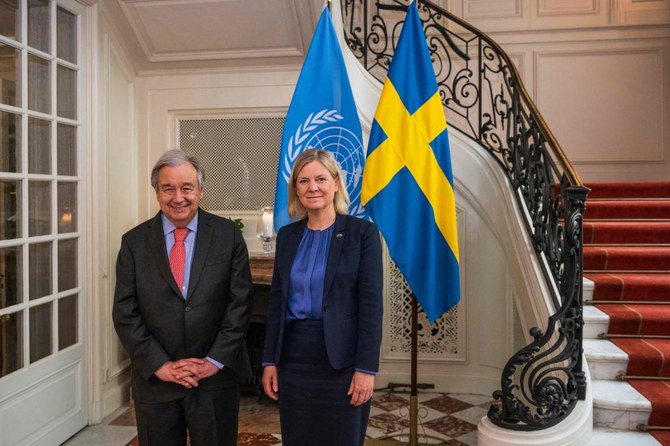 Stockholm: UN Secretary General Antonio Guterres called for quick and decisive action to ensure a “steady flow of food” as the war in Ukraine has disrupted global food and energy markets.

Speaking in Stockholm, Guterres said “the war must end now” while condemning the Russian invasion of Ukraine as “a violation of its territorial integrity and a violation of the UN Charter.”

“It is causing immense suffering, destruction and devastation of the country. But it also inflames a three-dimensional global crisis in food, energy and finance that is pummeling the most vulnerable people, countries and economies,” the Portuguese diplomat told a press conference.

Guterres stressed the need for “quick and decisive action to ensure a steady flow of food and energy,” including “lifting export restrictions, allocating surpluses and reserves to vulnerable populations and addressing food price increases to calm market volatility.”

The UN chief also noted that in spite of the war “there is no effective solution to the food crisis, without reintegrating Ukraine’s food production, as well as the food and fertilizer produced by Russia, into world markets.” Between the two, Russia and Ukraine produce around 30 percent of the global wheat supply.

Earlier on Wednesday Pope Francis pleaded against the use of grain as a “weapon of war,” and appealed for “every effort to be made” to “guarantee the universal right to food.”

On Tuesday, Russian Foreign Minister Sergei Lavrov said it was up the West and Kyiv to resolve the growing global food crisis.

During a visit to Bahrain, Lavrov said Western countries “created a lot of artificial problems by closing their ports to Russian ships, disrupting logistics and financial chains.”

He also called on Ukraine to de-mine its territorial waters to allow the safe passage of ships through the Black and Azov seas. Arab News

Gunman kills four at Tulsa hospital in new US mass...