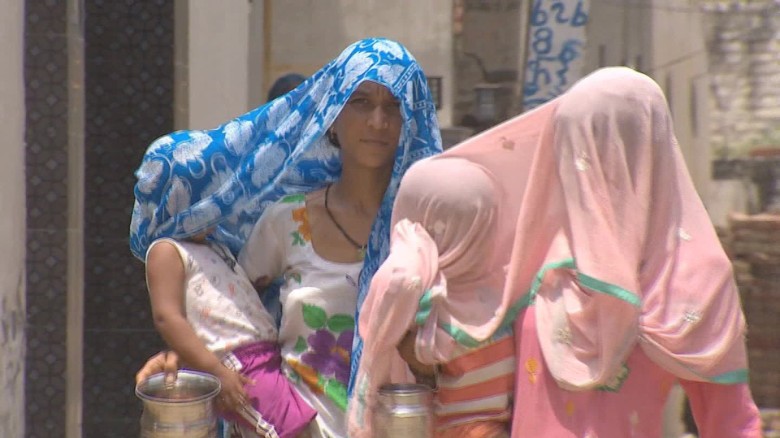 New Delhi: Polamma carefully descends the 250 steps from the hilltop slum where she lives in southern India to walk one kilometer to the nearest grocery store.

She is nine months pregnant and has four children to feed, but at the bottom of the steps community leaders of a dominant caste force her to go back empty-handed.

Since India went into lockdown to stop the spread of coronavirus on March 25, 57 families who live in Polamma’s hilltop village in Vijayawada, Andhra Pradesh, have been barred from going down the hill, even to purchase essentials such as food and medicine.

The families are part of the Yanadi community, who work mainly as waste pickers and drain cleaners and who — even before the coronavirus — were segregated because of their caste.

“We’ve been locked up here, like prisoners — we live near a milk factory, and there is not a drop of milk for my children to drink. We are called dirty, and they say we spread the disease,” said Polamma, who only goes by one name.

Pollama said she was stopped by higher caste community members as she tried to walk one kilometer to the market for food.

India’s caste system was officially abolished in 1950, but the 2,000-year-old social hierarchy imposed on people by birth still exists in many aspects of life. The caste system categorizes Hindus at birth, defining their place in society, what jobs they can do and who they can marry.

Those at the bottom of the hierarchy, who fall outside the four main categories of Brahmins (priests and teachers), Kshatriyas (warriors and rulers), Vaishyas (traders and merchants) and the Shudras (laborers), are considered “untouchables” or Dalits.

Millions of people, about 25% of India’s population of 1.3 billion people, are grouped under the scheduled castes (Dalits) and scheduled tribes (Adivasis) in India’s constitution. Adivasis are indigenous Indians who have been socially and economically marginalized for centuries.

Both groups have long endured social isolation, but it’s feared the rapid spread of the coronavirus and measures to stop it have worsened their segregation.

Jobs that Dalits and Adivasis have been forced to take for centuries — cleaners, manual scavengers and waste pickers — expose them to a greater risk of catching the virus.

During the pandemic, their jobs are considered essential services by the Indian government, but many say they haven’t been given adequate equipment to protect themselves against Covid-19. And if they get sick, there’s no social safety net to ensure they don’t fall even deeper into poverty.

When the Spanish Flu pandemic ripped through India in 1918 killing almost 17 million people, caste played a crucial role in determining who received health care — and who died.

Lower caste people living in crowded slums were the most exposed to the virus, and the least able to find food and medicine as the flu spread, according to historian David Arnold, who has extensively researched and written about the Spanish Flu epidemic in India.

Historian Amit Kapoor, author of “Riding the Tiger,” said 61 lower caste people died for every 1,000 in the community. For upper caste Hindus it was 19 for every 1,000, and the figure was even lower for Europeans living in India.

However, Kapoor believes that while people belonging to the lower caste were disproportionately impacted in 1918, the situation now is different. “While caste was very predominant in 1918, in 2020 the impact of epidemics have more to do with the economic hierarchy than the social hierarchy,” said Kapoor.

According to the United Nations Development Programme (UNDP) and the Oxford Poverty and Human Development Initiative (OPHI)’s global multidimensional poverty index (MPI), half of scheduled tribes were considered poor compared to 15% of higher castes.

Poverty makes lower castes more vulnerable during emergencies, according to the findings of a 2013 study by the International Dalit Solidarity Network, a network of international human rights groups fighting Dalit discrimination.

For example, after the 2004 Asian tsunami, Dalits were forced to remove bodies and debris, for very little if any pay, and weren’t offered any psychological support. Many weren’t compensated for their lost possessions, such as the bikes and fishing nets that were swept away, the report said.

“India has 600,000 villages and almost every village a small pocket on the outskirts is meant for Dalits,” said Paul Divakar, a Dalit activist from the National Campaign on Dalit Human Rights.

“This settlement is far from health care centers, banks, schools and other essential services. During times like Covid-19, the aid may not even reach this small pocket.”

He said repeated advice on social distancing threatened to encourage the kind of behavior seen in the northern city of Bareilly when migrant workers were doused with bleach disinfectant.

“Covid-19 is legitimizing these actions all in the name of hygiene and social distancing,” said Divakar.

Dalits are forced to take up the jobs such as cleaning, manual scavenging, working at brick kilns and leather-crafting — occupations considered “filthy” or “dishonorable” for higher-caste communities.

The sanitation and cleaning work formally and informally employs 5 million people, of which 90% belong to the lowest Dalit sub-castes, according to a five-month study of sanitation workers across India carried out in 2017 by Dalberg Advisors, a development policy and strategy firm, with the support of The Gates Foundation. CNN