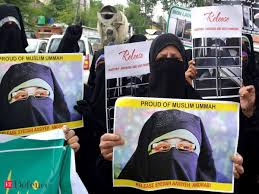 “Asiya and her colleagues Fehmeeda Sofi and Naheeda Nasreen have been shifted to solitary confinement by Narendra Modi government”. “Food delivered in shabby polythene and are deprived of reading material, even Holy Quran”, it added. These Kashmiri women are true representatives of essence of Kashmiri freedom struggle, the chairman said adding that incarcerating and depriving Aasiya and others of proper standardized medical care exposed India and its nefarious designs. The family of Asiya Andrabi, a pro-freedom jailed woman leader from Indian-administered Jammu and Kashmir, has expressed concern about her health and safety. —APP