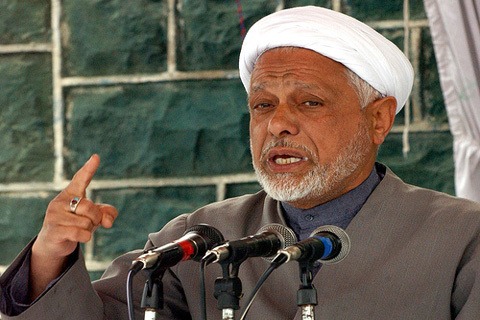 Srinagar: Jammu and Kashmir Ittihadul Muslimeen chief and senior Hurriyat leader Maulana Muhammad Abbas Ansari and President Maulana Masroor Abbas Ansari in their separate statements strongly condemned the vicious tactics of Wasim Rizvi, the ‘so-called and self-styled’ former Shia Waqf board chairman of Lucknow in which he has filed a petition in the Indian Supreme Court to delete some Quranic verses.

Maulana Muhammad Abbas Ansari termed Wasim Rizvi as a corrupt, satanic tool and said that the Holy Quran is safe and pure from all kinds of changes and alterations and distortions and shortcomings.

He said that the accursed Wasim, who was fed on the filth of RSS, was trying such vicious tactics to please his masters and divert attention from the Waqf Board scam.

On the other hand, Maulana Masroor Abbas Ansari also condemned Waseem Rizvi and said that Waseem Rizvi was making unholy attempts to divide the Muslim Ummah at the behest of his masters.

He questioned that is the position for a person who does not know how to read the Quranic alphabet to raise his sinister fingers on the verses of the Holy Qur’an.

Masroor Ansari said that Wasim Rizvi has nothing to do with the Shia school of thought and the Shia community has already rejected this accursed person.

He said that the Holy Qur’an is safe till the morning of Judgment and those who conspire against it or point fingers are the most foolish people.

He appealed to the people to be united and fight such conspiracies and retaliate against the evil deeds of the ‘accursed Wasim Rizvi’.

US may not withdraw troops from Afghanistan by May 1:...