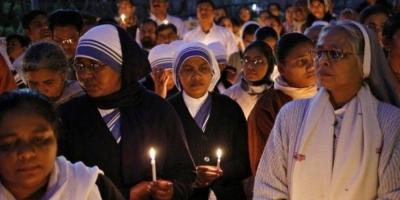 Hindu extremists believe that all Indians should be Hindus, and that the country should be rid of Christianity and Islam. They use extensive violence to achieve this goal, particularly targeting Christians from a Hindu background. Christians are accused of following a “foreign faith” and blamed for bad luck in their communities. These believers are often physically attacked and sometimes killed, as well as being under constant pressure from their family and community to return to Hinduism. If they do not “re-convert,” they may be boycotted by their community, with a devastating effect on their ability to earn income. Many believers are isolated and don’t know any other Christians.

Christians are persecuted in all areas of public and private life, and anti-conversion laws (currently in nine states, with more considering adoption) are abused to harass and intimidate Christians. Few people are actually convicted under these laws, but cases can drag on for years.

“As I was locked in isolation, I realized I had more time for communion with the Lord and I waited with patience, praying and thanking the Lord for everything.”

What has changed in India?

Persecution in India has increased significantly over the past five years, and has now remained relatively unchanged for the past year. The COVID-19 pandemic has offered a new weapon for persecutors, though, and Christians are often deliberately overlooked when official COVID-19 food and aid are distributed. This has left many desperate for food, particularly since many Christians are from the Dalit caste and thus very poor, and have lost their sources of income this year.

Who is most vulnerable to persecution?

Christians from a Hindu background are most vulnerable to persecution in both public and private life.opendoorsusa.org