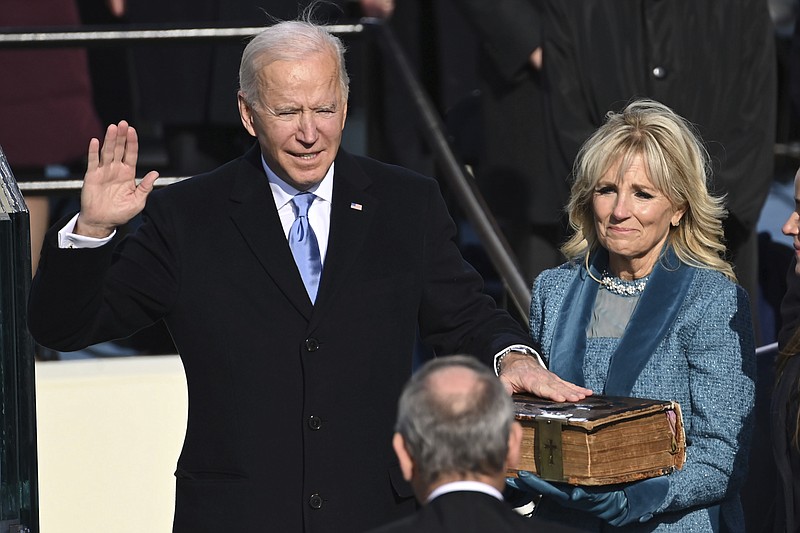 New York: US President Joe Biden is pledging a new path for the nation after Donald Trump’s four years in office.

That starts with confronting a pandemic that has killed 400,000 Americans and extends to sweeping plans on health care, education, immigration and more.

But for most of the world, Biden’s term, with vice-president Kamala Harris, also comes with hope of repairing ties left strained, or even wrecked, by Trump’s chaotic four years. Harris becomes the first woman, first Black American and first Asian American to win the second-highest US office.

French President Emmanuel Macron lauded Biden’s decision to return to the Paris Climate Accord, telling him “welcome back” in a congratulatory message after his inauguration.

“Best wishes on this most significant day for the American people!” Macron tweeted in English.

“We are together. We will be stronger to face the challenges of our time. Stronger to build our future. Stronger to protect our planet. Welcome back to the Paris Agreement!”

NATO General Secretary Jens Stoltenberg congratulates Biden on his inauguration as the 46th President of the United States and Harris as the Vice President.

“NATO Allies need to stand together to address the security consequences of the rise of China, the threat of terrorism, including in Afghanistan and Iraq, and a more assertive Russia.”

“A strong #NATO is good for both North America & Europe, as none of us can tackle the challenges we face alone. Today is the start of a new chapter & I look forward to our close cooperation!” he said in a separate tweet after the inauguration ceremony.

The head of the World Health Organization, WHO, congratulated Biden and Harris after their inauguration.

Biden has said he will halt the withdrawal of the US from the WHO, a process initiated by former President Donald Trump.

Resistance movement Hamas, which controls the Gaza Strip, said it was “not sorry” to see Trump depart, calling him “the world’s main source and sponsor of oppression, violence and extremism” and partner in “Israeli aggression” against the Palestinians.

Biden “must correct the wrong historical path of American policy which is oppressing our people,” and end policies aiming at “destroying the Palestinian cause”, said Hamas spokesman Fawzi Barhoum.

At the same time Palestinian government in the West Bank said it hoped Biden administration would be a chance to resolve the conflict.

“We hope that the presence of Biden will be a chance to apply international law and resolve the conflict, establishing an independent Palestinian state and putting an end to the suffering of the Palestinian people,” said Jibril Rajub, a senior official from Abbas’ Fatah party.Albawaba.com

Turkish media should narrate tales of half-widows & prisoners of...