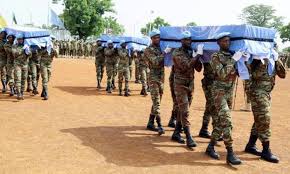 Bamako, Mali: Three United Nations peacekeepers died and six more were wounded Wednesday in northern Mali hours before the U.N.’s top official in the country expressed cautious optimism that a new roadmap would lead the turbulent West African nation to elections in March 2022.

The U.N. peacekeeping mission in Mali said the peacekeepers’ vehicle struck an improvised explosive device and the soldiers then came under attack by unidentified gunmen in the Timbuktu region. Ivory Coast’s army chief of staff, Gen. Lassina Doumbia, said the three dead peacekeepers were from that country and they were attacked by extremists.

The U.N. peacekeeping mission has been in Mali since 2013, after Islamic extremists took control of major towns in the north. A French-led military operation dislodged the rebels, but the jihadists have since regrouped in rural areas and expanded their reach, targeting Mali’s army and the U.N. mission.

According to the U.N., 231 peacekeepers in Mali have been killed due to hostile incidents.

In August, President Ibrahim Boubacar Keita was ousted from power by a military junta. Under international pressure, the junta appointed a civilian-led government to lead the country through an 18-month transition to new elections.

U.N. special envoy Mahamat Saleh Annadif, who heads the U.N. mission, told the Security Council that Mali’s transitional government “has more than once signaled the importance of the holding of elections, and preparations for the elections have already been undertaken.”

He said the newly revised roadmap “is consensus-based and quite exhaustive,” and as a result of the way it was drafted “we must be cautiously optimistic.” He cautioned, however, that the success of the transition requires completing political, institutional, electoral and administrative reforms and support from all political actors.

After five years as U.N. envoy, including some frustrations, Annadif said, “I dare hope that this window of opportunity is one that will not be missed for Mali.”

Mali’s U.N. ambassador, Issa Konfourou, told the council, the stabilization process “is at a critical point.”

“Its success depends first and foremost on the sacred union of all strata in Mali society to save our country and … also on the quality of international support in terms of finding a solution to the crisis,” he said. “I can assure you that the transitional authorities have undertaken to lay the basis for rebuilding Mali.”

Both Annadif and Konfourou expressed concern at the security situation in Mali, especially in the central region, as well as in surrounding countries that have also seen recurring attacks.

Thursday’s explosion and attack occurred during a security operation along the Douentza and Timbuktu axis about 20 kilometers (12 miles) north of the town of Bamabara-Maoude, the U.N. mission known as MINUSMA said in a statement. The attackers fled the scene and medical evacuations were carried out by helicopters, it said.

“At a time when all efforts are being made to bring Mali out of the rut, I deeply deplore the upsurge in these attacks against national and international forces, as well as civilian populations,” he said.

“He calls on the Malian authorities to spare no efforts in identifying and promptly bringing to justice the perpetrators of this heinous attack,” Dujarric said. Washington Post