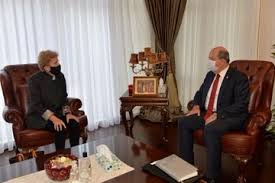 Nicosia: The United Nations’ (UN) special envoy to Cyprus Jane Holl Lute held separate discussions here on Monday with the leaders of the divided island, in a bid to nail down details for an international conference to promote new peace negotiations, officials of the two sides said.

Lute first met with Cypriot President Nicos Anastasiades, representing the Greek Cypriot community, and then headed for a similar meeting with Turkish Cypriot leader Ersin Tatar on the other side of the fence that divides Nicosia, the capital city.

The UN official held similar talks with the two sides at the beginning of December 2020.

UN Secretary General Antonio Guterres said in a report submitted to the Security Council on Friday that in pursuit of his Good Offices Mission on Cyprus, he plans to call an unofficial international conference once all sides give their consent.

He told Council members that the conference would decide the terms for the resumption of the long-stalled Cyprus reunification negotiations.

Participants in the UN-led conference will be the two Cypriot communities and the three “guarantor powers” of Cyprus’ independence — Greece, Turkey and the United Kingdom.

The latest negotiations on Cyprus, held in Switzerland, floundered in July, 2017, after the two sides failed to agree on a Guterres blueprint for a Cyprus settlement.

Cypriot government spokesman Kyriakos Koushos said that President Anastasiades had agreed to participate in the planned conference, expecting that it “will lead to a substantial resumption of talks with the aim of reaching a solution to the Cyprus problem within the agreed framework.”

This would mean reaching a solution based on UN Security Council resolutions and past agreements between the two sides for a federal Cyprus, with the two sides having equal political rights.

Koushos said that Lute had informed Anastasiades that the UN secretary general planned to call an unofficial international conference in February.

Tatar said after his meeting with the UN envoy that he opposed a federal settlement and advocated a solution supported by Turkey, under which Cyprus would be divided permanently into two separate sovereign states.

He said such a solution was warranted by what he called realities on the ground. Xinhua