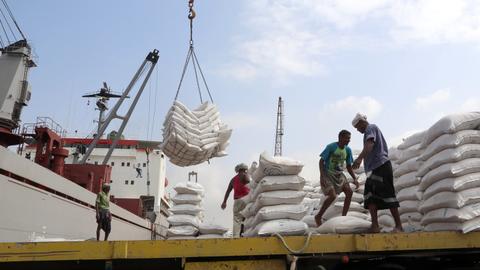 New York: UN Secretary General Antonio Guterres has said a “disappointing” $1.7 billion has been pledged by countries for humanitarian aid in Yemen –– less than half the $3.85 billion the world body was seeking for 2021 to avert a large-scale famine.

“For most people, life in Yemen is now unbearable. Childhood in Yemen is a special kind of hell. Yemeni children are starving,” Guterres said on Monday as he opened the pledging conference.

After it concluded, he described the outcome as “disappointing” and warned in a statement: “Cutting aid is a death sentence.”

Some 16 million Yemenis –– more than half the population of the Arabian Peninsula country –– are going hungry, the United Nations said. Of those, 5 million are on the brink of famine, UN aid chief Mark Lowcock has said. “This does not solve the problem,” Lowcock said after the pledging conference.

“It’s going to be impossible with such limited resources to prevent a large-scale famine.”

Humanitarian groups including Save the Children also responded with frustration, saying the world was turning its back on Yemen.

More than 100 governments and donors took part in the conference, co-hosted by Sweden and Switzerland.

More than six years of war in Yemen –– widely seen as a proxy conflict between Saudi Arabia and Iran –– have sent the impoverished country spiraling into what the United Nations describes as the world’s largest humanitarian crisis.

Some 80 percent of Yemenis need help, with 400,000 children under the age of 5 severely malnourished, according to UN data. For much of its food, the country relies on imports that have been badly disrupted over the years by all warring parties.

“The best that can be said about today [Monday] is that it represents a down payment. I thank those who did pledge generously, and I ask others to consider again what they can do to help stave off the worst famine the world has seen in decades,” UN chief Guterres said in a statement.

A Houthi spokesman Mohammed Abdul Salam hit out at the pledges, saying they were an attempt by countries involved in the conflict to whitewash themselves.

“The conference… does not help Yemen as much as it helps the aggressor nations by giving them the opportunity to cleanse their record,” he tweeted.

A Saudi Arabia-led military coalition intervened in Yemen in 2015 after the Iran-allied Houthi group ousted the country’s government from Sanaa.

The Houthis say they are fighting a corrupt system. The people’s suffering has been worsened by an economic and currency collapse, and by the Covid-19 pandemic.

UN officials are trying to revive peace talks, and new US President Joe Biden has said Yemen is a priority, declaring a halt to American support for the Saudi-led military campaign and demanding the war “has to end.”

US Secretary of State Antony Blinken said on Monday that Saudi Arabia and the government of Yemen are “committed and eager” to find a way to end the war in Yemen and called on the Houthi group to do the same.

Speaking after a visit to the region by his Yemen envoy Tim Lenderking, Blinken told the pledging conference: “He reports that the Saudis and the Republic of Yemen government are committed and eager to find a solution to the conflict.”

“We call on the Houthis to match this commitment. A necessary first step is to stop their offensive against Marib,” he said. TRT World