Subscribe Us
HomeLatest NewsUS still ready to meet Iran, not ‘dogmatic’ on how
Latest News 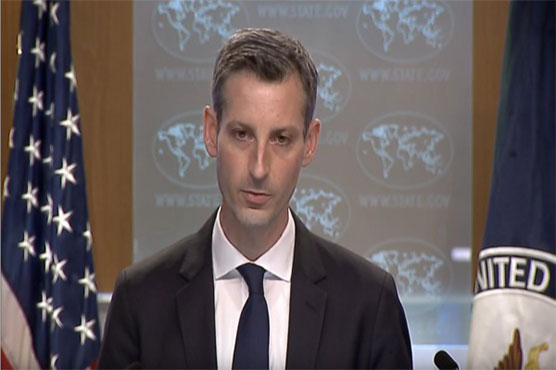 Washington: The United States said it remained ready to meet Iran but was not “dogmatic” about how, after Tehran rejected an EU-proposed gathering.

“We remain ready to engage in meaningful diplomacy to achieve a mutual return to compliance” in a 2015 nuclear deal, State Department spokesman Ned Price told reporters.

“We are not dogmatic about the form and the format of those talks.”

President Joe Biden s administration supports a return to the 2015 nuclear accord from which former president Donald Trump bolted and on February 18 said it was willing to meet with Iran in a meeting proposed by the European Union.

The meeting would involve the other signatories of the 2015 agreement — Britain, China, France, Germany and Russia.

But Iran said Sunday that the timing was not “suitable” as it remained insistent that the United States first lift sanctions imposed by Trump in violation of the agreement.

“As we have made clear, the United States is prepared to meet with Iran to address the way forward on a mutual return to compliance,” Price said.

“We re not dogmatic about what form that takes; what we are dogmatic about is the underlying commitment,” he said, “that this administration broadly has that Iran cannot be allowed to acquire a nuclear weapon.”

Iran has insisted that sanctions imposed by Trump, including a sweeping ban on its oil exports, should be removed before it reverses steps out of nuclear compliance that it took as protest measures.

US President Joe Biden took office with promises of a return to diplomacy with Iran, but both sides  determination not to look weak has jeopardized prospects of a quick breakthrough.

In the course of a few days, Iran has rejected a US offer to meet under the auspices of the European Union on reviving a 2015 denuclearization accord; and Biden ordered deadly airstrikes in Syria against Iranian-linked Shiite militias blamed for attacks on US interests in Iraq.

Considering the tortured history between the United States and Iran, experts said it was premature to declare the death of the latest diplomacy — but warned that the political window for both countries was narrowing.

Trita Parsi, the author of a book on then-president Barack Obama s efforts to secure the 2015 accord, known formally as the Joint Comprehensive Plan of Action (JCPOA), said that Biden, unlike his former boss, seemed determined to mitigate the political costs by showing he is tough.

“The message is that the Biden administration is trying to do some sort of a variation of the JCPOA without angering Republicans, Israelis and Saudis. And that is impossible,” said Parsi, executive vice president of the Quincy Institute for Responsible Statecraft, which is critical of US prioritization of military action.

If Iran ordered the attacks in Iraq to gain leverage, it was a “massive miscalculation, so I think to a certain extent it s fully understandable that the Biden administration feels the need to respond,” Parsi said.

“But the messaging — that it was mostly about reassuring the Saudis — is where it gets confusing.”

The strikes came just as US officials pointed to Saudi Arabia s role in countering Iran, its regional rival, in explaining why they would not directly punish Crown Prince Mohammed bin Salman even after Biden declassified intelligence showing he approved the killing of US-based journalist Jamal Khashoggi.

Lawmakers of the rival Republican Party praised Biden for the Syria strikes while Israeli Prime Minister Benjamin Netanyahu, who faces his latest election later this month, had been a fierce opponent of the JCPOA, openly rallying Obama s domestic rivals. AFP

Disappointing donor pledge of $1.7b sounds death knell for hunger-hit...