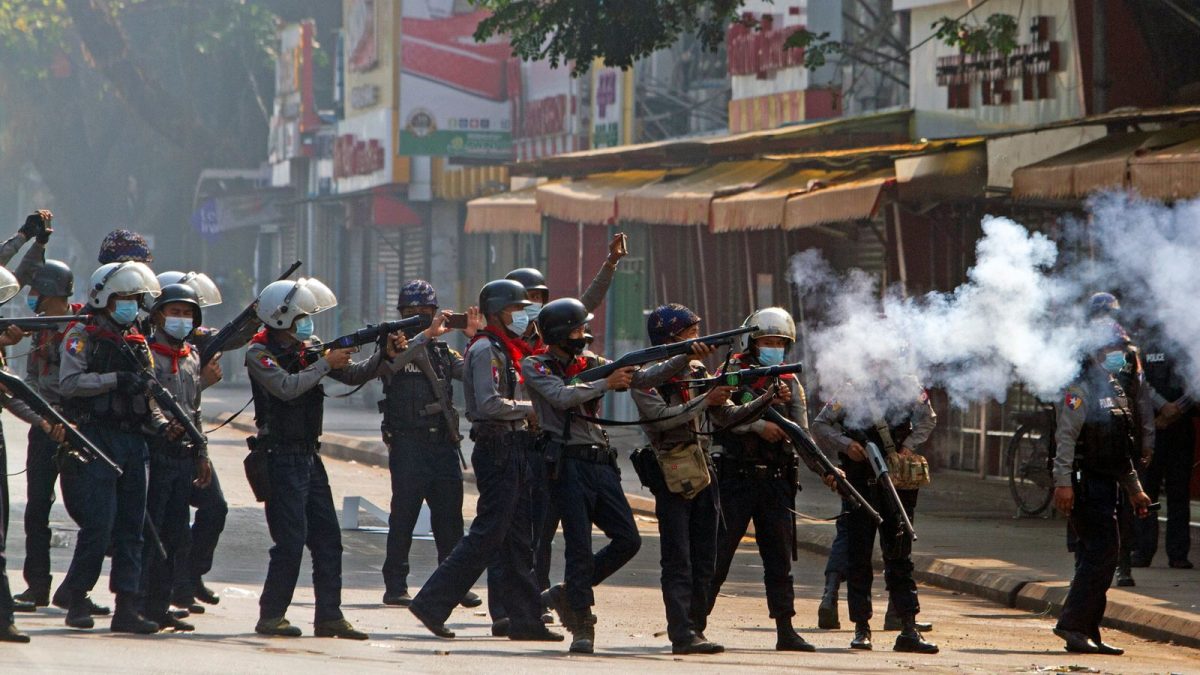 The UN’s human rights office said it has received “credible information” that the crackdown on people demonstrating against a military coup included live ammunition being fired into crowds, resulting in the deaths and dozens of injured people.

It is the highest single-day death toll among protesters, who demand the restoration of Aung San Suu Kyi and her elected government.

“We strongly condemn the escalating violence against protests in Myanmar and call on the military to immediately halt the use of force against peaceful protesters,” UN spokesperson Ravina Shamdasani said. The UK has described the “deadly and escalating” violence against demonstrators as “abhorrent”.

Despite the gunfire, flash bangs and stun grenades, which have left streets in several cities smeared with blood, protesters have refused to back down.

“If they push us, we’ll rise. If they attack us, we’ll defend. We’ll never kneel down to the military boots,” said Nyan Win Shein from one protest in Yangon.

Myanmar coup: Tens of thousands protest and call for Aung San Suu Kyi’s release despite internet being cut off

Footage shows protesters running away from police as officers charged at them, makeshift roadblocks being put up to slow the police advance and protesters being bundled into police trucks to be taken away.

Aung San Suu Kyi and much of her party’s leadership are accused of fraud in the party’s landslide victory in November’s elections.

The coup on 1 February, which brought a halt to tentative steps towards democracy after nearly 50 years of military rule, has drawn hundreds of thousands on to the streets and the condemnation of Western countries.

A group called the Whitecoat Alliance of medics said more than 80 medical staff had been arrested.

State-run MRTV television said more than 470 people had been arrested on Saturday after police launched the nationwide crackdown.

Protesters made the three-fingered salute in Yangon on Saturday

The UN Human Rights office has released a statement saying they “strongly condemn the escalating violence” and “call on the military to immediately halt the use of force against peaceful protestors.”

And Phil Robertson, deputy Asia director for New York-based Human Rights Watch, said: “The Myanmar security forces’ clear escalation in use of lethal force in multiple towns and cities across the country in response to mostly peaceful anti-coup protesters is outrageous and unacceptable, and must be immediately halted.”

He added: “Live ammunition should not be used to control or disperse protests and lethal force can only be used to protect life or prevent serious injury.” “The world is watching the actions of the Myanmar military junta, and will hold them accountable.”news.sky.com

The number of politicians with criminal cases has increased in...