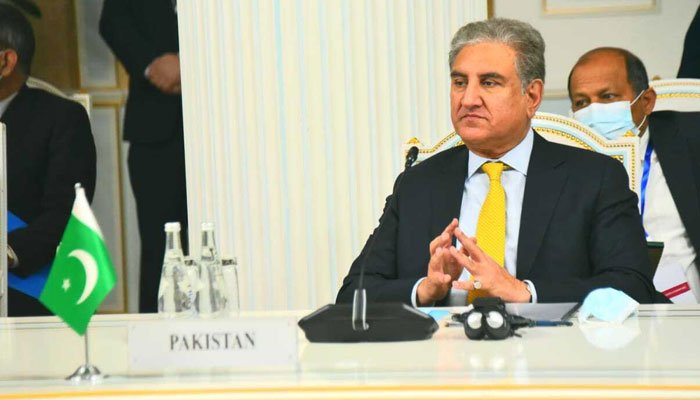 Dushanbe: Foreign Minister Shah Mahmood Qureshi told participants of the Heart of Asia Conference on Tuesday the Afghan peace process is at a “defining junction” and Afghanistan has never been so “close to turning the tide”.

“As we gather here today, the Afghan peace process stands at a defining junction,” said Qureshi while addressing the ninth Ministerial Conference of the Heart of Asia-Istanbul Process (HoA-IP) in Dushanbe, Tajikstan.

“Having faced conflict and instability for over 40 years, Afghanistan has never been so close to turning the tide,” Pakistan’s top diplomat continued in his address.

The foreign minister recalled how the Afghan parties gathering in Doha in September 2020 was a milestone that had occurred after the US-Taliban peace agreement was signed in February 2020.

“The progress made, thus far, has indeed created a historic opportunity for the Afghan leadership to achieve an inclusive broad-based comprehensive negotiated political settlement,” said Qureshi.

The foreign minister said the world had acknowledged that there was no military solution for Afghanistan, adding that this belief is needed to continue to guide the Afghan parties and the international community.

“In our outreach to Afghan leaders, across a wide spectrum, Pakistan has consistently urged them to remain constructively engaged for securing a positive outcome,” said Qureshi.

The foreign minister said Pakistan has told all parties to the conflict to take the process forward with good faith.

He added Pakistan has cautioned them “against the role of spoilers both within and outside Afghanistan”. He also expressed concern regarding the violence in the country.

“We fear that any space gained by ISIS and Al Qaeda could accentuate a threat of terrorism,” warned Qureshi. He also alerted the conference about the “risk posed by damaged infrastructure and lack of economic opportunities”.

“When the Doha peace agreement was signed last year we called it a moment of hope and optimism. It must be our collective endeavor to ensure that this hope is not dissipated that this rare opportunity is not lost,” said Qureshi.

The country’s top diplomat said going forward “flexibility and spirit of compromise would be indispensable”.

The foreign minister urged the international community to “focus on consolidating and building upon the progress made through the Doha process”.

Qureshi told the conference that besides “facilitating the peace process” Pakistan has extended “all possible support to Afghanistan”.

Earlier, the foreign minister called the Heart of Asia Istanbul Process an “important platform bringing participating and supporting countries together to advance shared goals of peace, stability and prosperity in Afghanistan”.

Qureshi said Afghanistan for Pakistan is an “important neighbour and a brotherly country with strong historical links”.

“No other nation could claim to have such immutable bonds with Afghanistan and thus more desirous of peace and progress in Afghanistan than Pakistan,” said the foreign minister.

On the sidelines of the conference, Qureshi will hold consultations with key regional and international partners.

$800,000 raised for slain Pakistani immigrant’s family in US