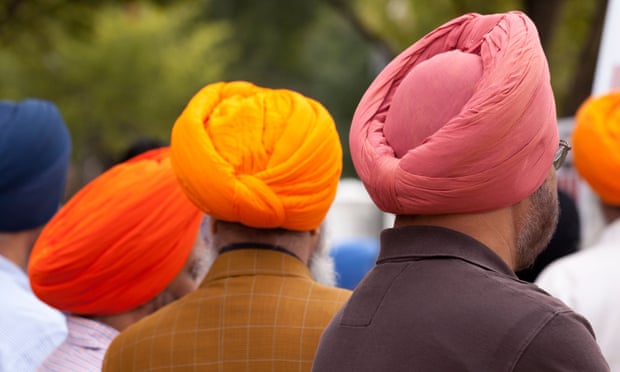 Concerns are growing that online “hate factories” spreading misinformation and propaganda about minority groups in India are influencing and radicalising people in Australia.

In late February, men armed with bats and hammers attacked four Sikh students in a car in Harris Park in western Sydney. The occupants escaped unharmed, but their car was severely damaged. Police are investigating the attack, but have stopped short of calling the attack a hate crime.

Community leaders say divisions within the Indian-Australian community have grown, as Hindu nationalists use Facebook and Whatsapp groups to spread divisive rhetoric targeting minority groups including Sikhs and Muslims.

The divisions are rooted in the ongoing farmers’ protest in India, where thousands of farmers – the majority of them Sikhs from India’s northern region – took to the streets to demand the government revoke new agriculture laws.

Tensions boiled over when police intervened at a rally in Sydney, also in February. Sikh community members, seeking to show their solidarity with the farmers protest in India, were met with supporters of the governing BJP party, forcing police to break up the rally.

No arrests were made, but the sense of simmering acrimony stuck with many who witnessed it.

Amar Singh, the president of charity Turbans 4 Australia, said he was worried about how the extreme rhetoric targeting minority Indian groups could affect his community.

“I’ve been in Australia 22 years, and I have never seen it this bad before. For me personally, it’s been an eye-opener to see how much hate there is in the community.

“I do feel like my community is in danger. If a person can be targeted … for their background or religion, it’s a danger to our whole society.

“These attacks, in addition to the bullying and harassment online, is certainly not welcome.”

Singh said that some people in online groups were advocating for members to boycott particular businesses based on whether the owners were Sikh or Muslim.

“That’s not the way we should do things, we shouldn’t pick where we shop based on the ethnicity or religion of the owner. It goes against our multicultural society here in Australia.”

He said the rhetoric needed to be stemmed, or the violence would only escalate.

“If we allow it to flourish, whether it be today or tomorrow, it will come back for us, in a much bigger way.”

Dr Surjeet Dogra Dhanji, a post-doctoral fellow on the Indian diaspora and migration at the University of Melbourne, said that community members were identifying with elements of the protest because of connections to family and friends in India.

“Owing to the links maintained between the diaspora with family and friends in India and the effects the protests have had on them either directly, indirectly, or ideologically, parts of the conflict have crept into the lives of some of the diaspora in Australia who feel a need to express themselves in one way or another,” she said.

Dhanji explained that some pockets of the Indian community viewed Sikhs as an extension of the protest in India.

“Some anti-farmer hype has become anti-Sikh hype in India and has permeated into Australia among sections of the diaspora who still have, and maintain, links to India,” the academic said. “Given that identity has become a key factor in this ongoing discord, some have resorted to violence to express their position and feelings, unable to separate the political distance from India with Australia.”

Deepak Joshi, co-founder of the not-for-profit organisation, The Humanism Project, explained that these divisions were not exclusive to Australian Indian communities, but reflected a wider trend.

“There has been a polarisation of Indians, not just in India but in diaspora communities all over the world. And at the heart of all this are the extreme elements who support BJP’s right-wing nationalism, and who are systemically dividing communities.

“There is a simmering hate among people who are loyal to these organisations and these groups.

“There are Facebook and Whatsapp groups that are specifically targeted at canvassing for the BJP, and the kind of hate they spread is unbelievable.”

Joshi told the Guardian that the groups, usually intended to just act as community platforms or noticeboards, had been “infiltrated” by extreme elements, and are being used to spread messages from “hate factories” in India.

“Many of these far-right elements have infiltrated existing community organisations and are driving hateful narratives and misrepresenting the peaceful and inclusive ethos of the Hindu religion.

“The hate factories that are simmering in India, and because of social media, are being used to influence diaspora communities around the world.”

He described “hate factories” as being a near never-ending stream of messages of hate and division, sometimes masked as religious or historical narratives, that are intended to radicalise elements of the community.

“These are little, insidious messages that circulate day in and day out in the community.

“It’s happening constantly, and happening on community platforms. And this is just the tip of the iceberg, this is reaching decent community members and leaders.”

Dhanji explained that some elements of the Indian community have been swept up in these discussions on the back of community leaders looking for “notoriety.”

“None of them are politicians per se but they manipulate the crisis to their own advantage … for their own popularity.”

Dhanji said the volume of fake news on social media meant it was easy to then get caught up in the spread of misinformation. “Some of these social media messages prey on the religious and nationalist fervour,” she said. “It creates a bit of a whirlwind effect such that the messages become a reality affecting them in Australia away from the country of origin.”

He also questioned why the Vishwa Hindu Parishad, an affiliate of right-wing Hindu nationalist group Rashtriya Swayamsevak Sangh, were allowed to conduct religious education in public schools in NSW.

A joint statement endorsed by more than 60 Indian community organisations in Australia, issued by the Hindu Council of Australia in response to Shoebridge’s comments, said there had been a “series of events and incidents in the last few years” that have been “unsettling and disturbing for the peaceful Hindu community”.

The statement condemned the violence, but refuted the upper house MP, and accused people of “Hindu-phobic” attacks based on “phantom charges against the Hindu community.”

“All such attacks on members of the Australian Hindu community are propagating Hindu-phobia and creating a damaging perception of our community. We refute these fake narratives.”

“We demand that the government and relevant agencies bring an end to this Hindu-phobia and hate attacks against our community.

“We appeal to the Hindu community and other kindred communities to work towards making Australia the place for all peace-loving people who believe in a fair go and the rule of law.”

NSW police have said they are investigating the attack on the students, saying inquiries are ongoing, but stopped short of calling the attack a hate crime.

It also comes after 11 Indian community groups met with Multicultural NSW twice, once just before the attack on the Sikh students, and again earlier this week.

Multicultural NSW said in a statement that they have been working “closely” with the Indian community, and that they were seeking “practical” solutions.

“A number of meetings have been convened by Multicultural NSW with the NSW Police Force and community leaders to find practical solutions to promote community harmony.

“Multicultural NSW commends community leaders for condemning violence and hatred in all their forms, and for maintaining an active commitment to unity and community harmony.”

However, Joshi said he believed that authorities had not done enough to prevent divisive rhetoric from erupting in violence.

“The authorities need to clamp down hard on it, and call it for what it is, a hate crime, and investigate it as such.

“They have been treating this as a ‘tension’ between two communities, but this is not the case.

“Calling it tension between communities only puts all the Hindus in one bracket, and a large majority of them would never resort to such a thing. This is extreme elements of the community, loyal to the BJP.” The Guardian