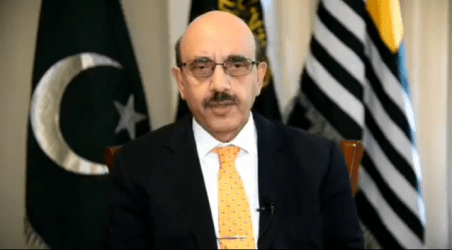 Islamabad: President of Azad Jammu and Kashmir Sardar Masood Khanwhile praising the efforts of the Pakistan-Kashmir community in raising the Kashmir issue said that they have helped internationalise the Kashmir cause.

“Over the years, our diaspora community has undertaken these activities voluntarily using their own resources and making Kashmir liberation struggle truly a people’s movement,” he further said while speaking to Tajamul Hussain Khatana, President EU-Pak Friendship Federation Italy, and Awam Dost Group Italy, who called on him here.

Khatana informed that the Pakistani-Kashmiri community in Italy has been very active in creating awareness on Kashmir. He went on to say that before the outbreak of the coronavirus pandemic, various events including rallies on Kashmir were organised in the city of Bergamo and also 15 August was marked as a Black Day in Brescia. Similarly, protest rallies have been organised in front of the Indian Embassy.

He informed that Member of European Parliament (MEP) Fabio Massimo has over the years been actively involved with EU-Pak Friendship Federation Italy and has helped mobilise critical support for the cause of Kashmir.

President Khan while paying tribute to the efforts of Khatana said that the organisation has been effectively highlighting the Kashmir issue all over Italy. He added that in Europe the Pakistani-Kashmiri community has been very active and played a dynamic role in advocating the issue of Kashmir and have effectively raised the Kashmiris struggle for their right to self-determination.

The president said that the people of Kashmir are indebted to the efforts of such organisations for holding large demonstrations all over Italy and also projecting the cause of Kashmir in all European forums, especially in the European Parliament and the Human Rights Council.

Meanwhile, Sardar Masood Khan said, “Pakistan is a gift from Allah to the Muslims of South Asia, if we do not protect it, it will be ungratefulness to Almighty. Our Ulema, Mushaikh and religious parties should play the same role for the security and stability of Pakistan as they did in the movement for the establishment of Pakistan.”

The state president said, “We would have to seek guidance from the teachings and life of the last Prophet Mohammad (PBUH) in every sphere of life including politics, economy and sociology. The Great Prophet Mohammad (PBUH) through his unprecedented wisdom and unchallenged farsightedness had turned the worst society of his age into the most civilized society in the world and his era is still quoted as a precedence in the world even today.”.

During the meeting with Maulana Obaidullah Farooqui, Sardar Masood Khan stressed the need for interfaith and sectarian harmony in the liberated territory. APP