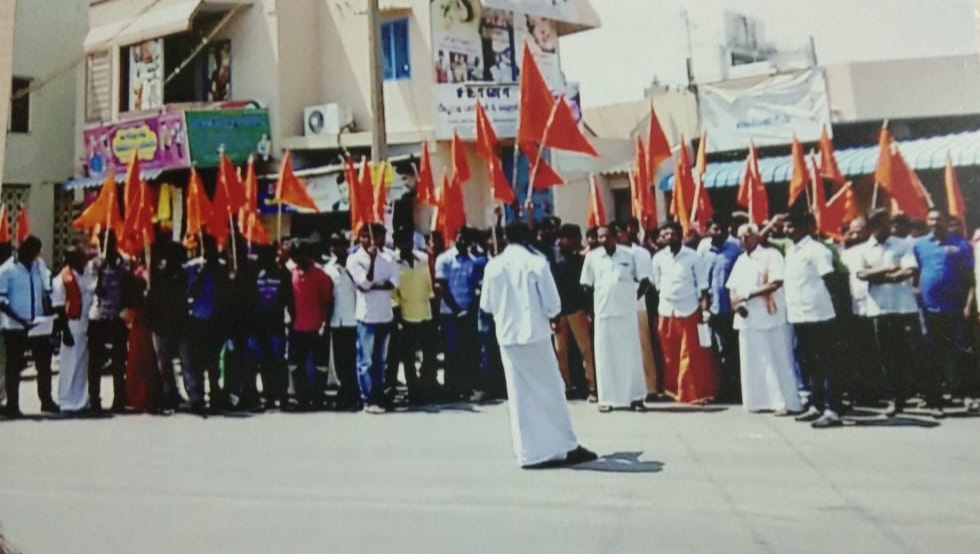 As the push towards making India into a Hindu theocratic nation-state takes hold under Narendra Modi led India, it has given thugs and extremists of the Rashtriya Samyamsevak Sangh (RSS) relative freedom to marginalize Muslims, Dalits, Tribal people and Christians of India. With state endorsement and impunity, they have taken to the streets to further the majoritarian need to suppress India’s minority populations. Provocations and attacks often go unpunished when it suits the majority population, and particularly when it is RSS extremists that lead those attacks. Recently, the Indian state of Madhya Pradesh (MP) saw attacks in different areas where Hindutva militants were not only given impunity but also were aided by the state in their attack on minority neighborhoods. Residents of Begum Bagh neighborhood in the town of Ujjain, Dorona village in the district of Mandsaur, Chandan Khedi village near the city of Indore were at the receiving end of RSS extremism on four different occasions between December 25, 2020 and January 3, 2021. Chandan Khedi village, in particular, witnessed one of the worst such clashes where a large crowd of Hindu militants entered the village, beat its Muslim residents with sticks, and attacked their livestock. A toddler was attacked, according to India’s trusted news broadcaster, NDTV1.

Following are the accounts of the violence that erupted in these regions.

Dorona Village, Mandsaur District: On December 25, 2020, a large mob of Hindu extremists belonging to the fringe group Vishwa Hindu Parishad, went on a bike rally to raise funds and solicit donations to build a temple in Ayodhya2, in a Muslim majority area of Mandsaur, where there were about 80 Muslim homes. The Ram Temple is being built over the site of the demolished Babri Mosque. The mosque was demolished in 1992 by extremists. The Supreme Court of India, in a judgment which has been questioned by many, awarded the land to the very people that destroyed the mosque. It beats all logic that the rallies in Dorona, a Muslim dominated neighborhood, were carried out to ask for funds to build the temple in Ayodhya. On December 29, 2020, the groups again went into the neighborhood and planted a saffron flag (symbolic of Hindu nationalist politics) over a mosque in the neighborhood. The event unfolded despite Muslim locals seeking protection from the local police a day before the incident in anticipation of such communal tensions.3 Nine were arrested and there is an investigation against 49 others. The religious identities of those arrested are unclear.

Begum Bagh neighborhood, Ujjain: On December 25, 2020, multiple rallies was carried out in a Muslim neighborhood and there was some communal clashes. The police have claimed that these were instigated by the Muslim residents. The residents claim that provocative statements were raised in the rally to which they retaliated.4 Following the incident, eight muslims were arrested and the neighborhood was demolished by state authorities claiming that the buildings were constructed illegally. The residents however claim that they have lived in the neighborhood for many years.5

With a blatant disregard to evidence, authorities demolished a Muslim man’s house, on suspicion that some of the rocks that were thrown were from his house. It is widely reported that the stone-pelting were from a Hindu neighbor’s house, but the police demolished the Muslim owned property using the excuse that the construction was done illegally. When he protested saying he had nothing to do with any stone throwing or any violence, one of the female police officers is reported to have said “If you had, we would have arrested you.” His only crime in the eyes of authorities, was that he is Muslim. That alone was enough to convict him and demolish his house, if not arrest him. A former Supreme Court of India judge, Deepak Gupta has spoken against this action, calling it a “mockery of the rule of law.”6

Chandan Khedi village: This village faced the worst of the extremist outrage as outlined above following a Ram Temple fundraising rally on December 29, 2020. The extremists were in the area apparently to raise funds and solicit donations. About 200 extremists then began chanting slogans as worshipers prayed inside a mosque. Later, mobs climbed onto a mosque structure using a police vehicle and started demolishing it right in front of the police.7 Over 100-strong police contingent stood by, and as is often the case, might have helped along. The police arrested 27 people which is seen as a retaliation against the victims of the riots themselves. All of the 27 are Muslim. Here again, the state authorities carried out a demolition drive claiming they needed to widen the road on December 31, 2020.8 Following the tensions, a large crowd of Hindu rioters from many surrounding villages entered the village, beat the Muslim residents with sticks, attacked their livestock, torched a house, and a toddler too was attacked. Gunshots were also heard1, however, there is little information on the damage to human life and property. The extremists also broke into many of the houses, and defaced homes. In addition, they tore down any Muslim markings, and placed the RSS saffron flags on many of the Muslim homes.

In all of the above instances, the mobs, in the name of fundraising rallies brutally attacked mosques and Muslim neighborhoods with the aid of police, or at best, with the police standing by while the attacks were happening. The arrests made are of Muslims and authorities demolished Muslim neighborhoods immediately after the clashes. Thankfully, according to the reports we have obtained until now, no lives have been lost. But lives continue to be threatened since the Modi government never condemns these heinous acts of violence. Adding fuel to the fire, a local Hindutva leader connected with the RSS, Acharya Shekhar, posted a video on social media stating that Muslims will be massacred to the point that burial spots would run out. Prime Minister Modi is a full time member of the RSS since 1971, which is the ideological parent of his political party, the Bharatiya Janata Party. Justiceforall.org