Subscribe Us
HomeInformation‘Attempts on to spread hatred against Muslims in IIOJK’
Information, NGO

‘Attempts on to spread hatred against Muslims in IIOJK’ 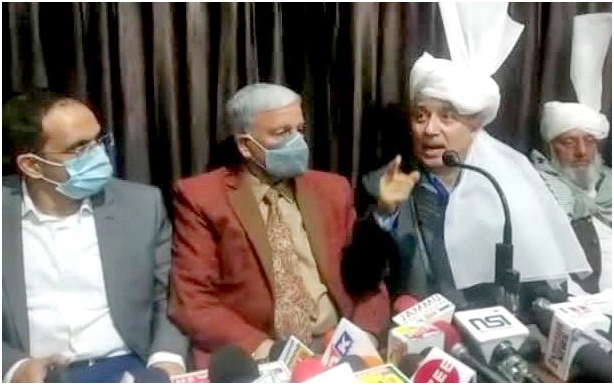 Jammu: In Indian illegally occupied Jammu and Kashmir, Muslim activists, including former bureaucrats referring to anti-Muslim designs of Hindu extremists associated with RSS and BJP have said that some elements are making deliberate attempts to harm the communal harmony especially in the Jammu region.

Former bureaucrat Khalid Hussain and advocate Sheikh Shakeel Ahmad at a press conference said that Muslims of the Jammu region do not need a certificate from anyone to prove their loyalty.

“Deliberate attempts are being made by some elements to vitiate the peaceful atmosphere of Jammu (region) by peddling lies about Muslims being land grabbers even as the fact of the matter is that there are only a handful of Muslims who have availed land under the Roshni Act,” Hussain said.

Prominent members of the community such as businessman Javed Iqbal, social worker Abdul Majid and Bathindi sarpanch Hafizullah were also present at the press conference. Hussain, who is a former deputy commissioner, said that there are “elements who are spreading hatred against Muslims by accusing them of trying to change the demography of Jammu”.

“My family is living in Jammu for generations and so are … Gujjars and Bakerwals,” he said.”

During the press conference, advocate Sheikh Shakeel Ahmad said that “there are certain elements that are playing politics to divide the people”. He also spoke about protests that had taken place in Bathindi, and said that security personnel should be deployed in strength in Bathindi, Chuwadi, Sunjiwan and Gujjar Nagar areas of the (Jammu) city as the [Muslim] minority community is feeling oppressed and depressed.

Ahmad highlighted the need for maintaining communal harmony and brotherhood by all citizens of Jammu. KMS

India takes leaf from Israeli playbook for persecution in IIOJK