Subscribe Us
HomeArticleBJP got blinded by Article 370 success. Now it’s getting a reality check
Article

BJP got blinded by Article 370 success. Now it’s getting a reality check 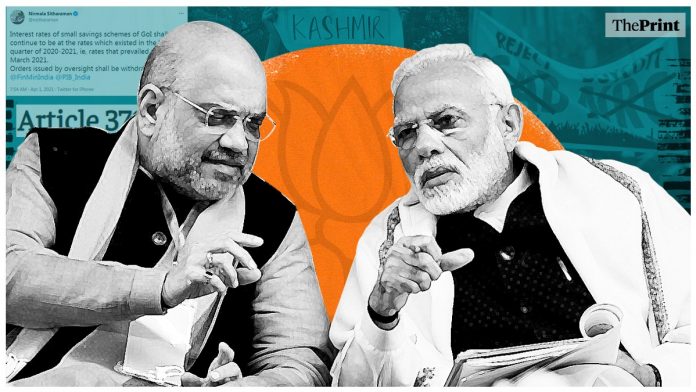 If the Bharatiya Janata Party had a theme song, it would most likely be Britney Spears’ ‘Oops!…I Did It Again’. The number of times the BJP has retracted its policy decisions due to a public backlash or an imminent election is now getting embarrassingly one too many. This time it was the five assembly elections that made Finance Minister Nirmala Sitharaman realise, at 7.54 in the morning, that she had made an oversight — a decision was made without her “noticing” it.

If you thought the Narendra Modi-Amit Shah government, with its twin House majority and might, can get away with anything, especially after the Article 370 decision, think again.

On 31 March, the website of the finance ministry uploaded an ‘Office Memorandum’ issued by the Department of Economic Affairs that cut interest rates sharply on various small savings schemes by 40-110 basis points. Nirmala Sitharaman overturned this decision the very next morning, saying it was an oversight. Top bureaucrats have, however, confirmed that such a decision could not have been made whatsoever by an “oversight” because the process for such a ruling is robust.

According to a senior government official speaking to The Indian Express, “The file on quarterly reset of interest rates on small savings moves from Deputy Director to Director, Budget, then Joint Secretary or Additional Secretary Budget and Department of Economic Affairs Secretary. The rates are thus decided within the Budget division, usually with the prior knowledge of the Finance Minister.” Obviously, the initial ruling upset the middle class and could have made things go downhill for the BJP in the five assembly elections.

But this is not the first time the BJP has done something like this. Former finance minister Arun Jaitley’s introduction of the Goods and Services Tax (GST) came in the backdrop of many rollbacks — from tax slabs to taxable items in them.

One such item was the sanitary pad, which was taxed as a “luxury item” at 12 per cent. It enraged women around the country, which perhaps made the government realise its ‘Beti Bachao, Beti Padhao’ campaign would fall flat on its face if they continued to tax sanitary pads, an essential item. One of the leading factors for girls dropping out of school in India is menstruation. Soon after, interim finance minister Piyush Goyal announced that sanitary pads would be exempt from tax. Eventually, 178 items were removed from the highest tax slab of 28 per cent and it took the Modi government four months to realise it.

The National Register of Citizens (NRC) exercise was first rolled out in Assam, and despite Home Minister Amit Shah making it an election issue, the BJP hasn’t been able to extend it pan-India, largely due to the nationwide protests in December 2019 after the Citizenship Amendment Act (CAA) was enacted.

The BJP is unable to go ahead with its so-called bold reforms despite being in its strongest position politically and electorally simply because it’s not pro-people. And the problem lies in the yardstick it has chosen to assess public sentiment on ‘bold’ decisions — the abrogation of Article 370 in Kashmir. The nation erupted in jubilation over this decision because the people of India — the majority of them anyway — wanted it. The BJP mistook this public sentiment to be a confirmation of how people will be pro-BJP on any decision it takes. It was obviously wrong.

The backlash to the three farm laws that the BJP introduced without consultation with the public is the prime example. As much as the BJP made it out to be a protest led by lumpen elements who were ‘anti-India’, the truth is that farmers are not happy with the agricultural laws because it makes them insecure about their future. The same is the case with the NRC. People are insecure about having to prove their citizenship in the face of absent documents and widespread illiteracy. Of course, many who lean far-Right politically claim that only Muslims are insecure about the NRC, but 12 lakh out of the 19 lakh people excluded from the final Assam NRC list were Hindus. So, the popular imagery on proving citizenship must be similar to what people experienced during demonetisation — standing in several kilometre long queues, uncertain if the documents they hold will be enough to prove their citizenship.

If the BJP is still not convinced that its policies don’t seem pro-people, it should introspect why its own ministries implored the finance ministry for months not to go in for privatisation of PSUs. The government has chosen to keep “bare minimum presence” in strategic sectors while non-strategic sectors have been marked for complete privatisation, mergers or closures. A telling concern is about defence manufacturing, a strategic sector that has always been State-owned is now being divested and/or privatised. The government says this will encourage domestic production but the defence ministry itself has expressed concerns over the quality standards and how privatising it would not be in the interest of national security.

They say that learning brings change in knowledge and behaviour as a result of experience. It is high time the Modi government started giving some thought before introducing its ‘bold policy move’. The Print