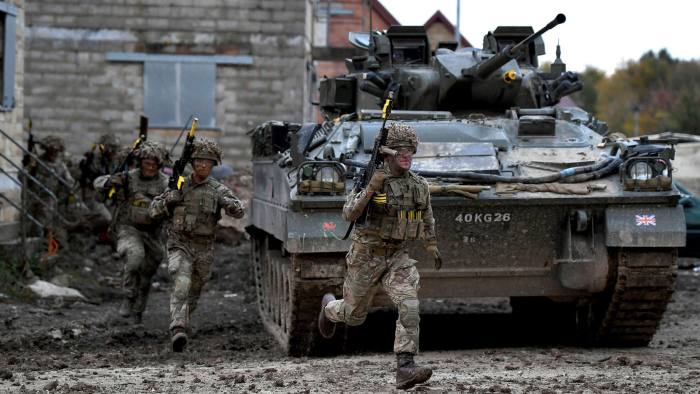 The integrated defence and foreign policy review — which has been repeatedly delayed as Downing Street battles to control the coronavirus pandemic — will be published next week as a statement of the prime minister’s post-Brexit vision for the country.

But the document, grandly titled “Global Britain in a Competitive Age”, is likely to be controversial with foreign defence partners. Core defence capabilities will be retired to pay for digital warfare technology and the UK’s promised focus on the Indo-Pacific risks detracting from its responsibilities in the north Atlantic. It also remains unclear how a post-Brexit UK will co-operate with EU countries on security.

“I’m sure the review will be a powerful essay about Britain’s role in the world,” said Lord Peter Ricketts, the UK’s former national security adviser. But he added: “Will our ambitious plans actually feed through into something which makes sense?”

The most contentious decision is on the size of the army, which is widely expected to be cut from a notional force of around 82,000 to something closer to 72,000. Even though the Ministry of Defence secured an unexpected £16.5bn spending boost from the Treasury in the autumn, the department is still seeking savings to reduce a £17bn budget black hole and fund better cyber defences and new military capabilities in space.

US military officials say privately that while they value UK special forces and are impressed by Britain’s growing cyber expertise, troop numbers still matter. Washington has traditionally relied on the UK to field a heavy division, which means an army of roughly 100,000 personnel. Michael Shurkin, a security expert at the Rand Corporation, insisted that the US’s historical default to military co-operation with the British is based on a recognition of its quality, rather than troop strength. “It’s not just that we expect the British to show up when we call — we really want the British to show up when we call, because they’re good,” he said.

However, he made clear that “it becomes a real problem” if suddenly a trusted ally can no longer provide the troop numbers it once could.

The challenge for ministers is how to present cuts to the army without causing alarm in Washington and Nato headquarters. “How well it goes down with our allies depends very much on how honest we are about what we’re doing,” said Jack Watling, a land warfare specialist at the Royal United Services Institute think-tank.

He argued that if the UK offers to provide attack helicopters, long-range precision rocket artillery and reconnaissance troops to assist other nations, this could help compensate for a reduction in overall personnel. “If we set out a credible roadmap that admits it’s going to be rough for the next decade but by 2030 we will deliver something that is clearly defined, then the US will probably respond positively,” Watling said.

Another potential flashpoint will be the review’s focus on the Indo-Pacific, as the UK pursues deeper defence ties with Asian allies such as Japan, India and South Korea in an effort to counter China’s growing military assertiveness. China now has the world’s largest navy and is honing its long-range ballistic missile capabilities. Beijing’s $12bn boost to its 2020 defence budget ($193bn) was greater than the combined defence budget increases in all other Asian states combined, according to the International Institute for Strategic Studies.

The Royal Navy’s flagship aircraft carrier will deploy later in the spring on her maiden voyage to East Asia, and is due to carry out joint exercises with Japan, among others. But some experts have questioned whether the UK’s commitments are real or merely symbolic — especially since Britain does not have enough of its own fighter jets to equip the carrier, and is relying on the US Marine Corps supplying F-35B Lightning aircraft.

“For Australians, Blighty showing up in the old neighbourhood is very easily seen through the lens of imperial nostalgia or post-Brexit hubris,” said Euan Graham, an Asian defence expert at the IISS, based in Singapore. “The Brits should be judged on their consistency of presence, not a once-in-a-generation deployment of a carrier group, that’s not really of much use.”

There are suggestions from some analysts that the US — which is refocusing its own military efforts against China — might prefer Britain to strengthen its presence in the north Atlantic, the Gulf and the Mediterranean, allowing American forces to concentrate on Pacific defence themselves. “Maybe strategically speaking, the better way to [counter Beijing],” Shurkin suggested.

‘A tilt away from Europe’

The UK’s European allies may also be wary of British ambitions in Asia. Ricketts — a former British ambassador to France — described Johnson’s enthusiasm for a return to the seas east of Suez as “a tilt away from Europe as much as a tilt towards the Indo-Pacific”. He said the French will be keen to see the integrated review acknowledge the EU’s contribution to European security. But he noted: “I think they’ll be disappointed.”

We could have a very useful role closer to home which is logistically possible, militarily feasible, and we could have real clout within Nato

One solution to the MoD’s financial shortfalls would be to find savings through collaboration. Nicolas Baverez, a defence expert at the Paris-based Institut Montaigne, argued Britain and France share a challenge in funding new hypersonics, robotics, and space capabilities. “It will be very difficult for each of our countries alone to finance all these fields of research,” he said. “The answer will be to make bets and choices, and maybe to co-operate, to mutualise certain costs.”

However, the integrated review is more likely to seek alliances further afield. In a speech to the Munich Security Conference last month, Johnson boasted that in leaving the EU, the UK had “restored sovereign control over vital levers of foreign policy”. Johnson added optimistically that European leaders were increasingly looking to American allies “to rediscover that far-sighted leadership and the spirit of adventure and transatlantic unity that made our two continents great in the first place”.

Lord David Richards, former chief of the defence staff, suggested Britain should not forget threats such as Russia in its own backyard.

“We could have a very useful role closer to home which is logistically possible, militarily feasible, and we could have real clout within Nato,” he said. “But the risk is that we fritter it all away by going all around the globe and don’t achieve any real strategic influence anywhere.” FT.com