Subscribe Us
HomeLatest NewsCourt should not fall into trap of interpreting everything as terror: Umar Khalid to Delhi High Court
Latest News

Court should not fall into trap of interpreting everything as terror: Umar Khalid to Delhi High Court 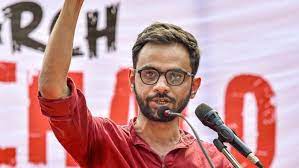 New Delhi: Activist Umar Khalid, who is in custody as an accused in Delhi Police’s case of larger conspiracy behind the Northeast Delhi riots, Monday contended that the court should not fall into the “trap” of interpreting everything as a terrorist activity, after the bench asked whether protests against the Citizenship Amendment Act instilled a sense of fear and insecurity among the public.

The submission was made before the Delhi High Court, in context of reference to a Supreme Court ruling wherein it has been stated that an activity which creates “a sense of fear and insecurity” among people can be called a terrorist act.

Senior advocate Trideep Pais, representing Khalid, contended that the trial court in its order denying him bail has “escalated” chakka jam “without any basis” to a “terrorist act”, and merely reproduced witness statements without any discussion whatsoever.

Pais further argued that protests were against “an unjust law” and were not targeting or perpetrating violence in the manner in which Section 15 of UAPA contemplates. Section 15 defines a terrorist act under the UAPA, the provisions of which have been invoked against Khalid.

“Several of the acts or instances cited against me (Khalid) were not even qualifying (as) terror. They were just either protests or meetings. They did not qualify even as terror or conspiracy. I did not take part in any violent protest, nor is there any material to show my participation in the violent protest,” submitted Pais.

The division bench headed by Justice Siddharth Mridul earlier asked whether a sense of fear and insecurity was created during and in the aftermath of the protest or not. “Is it the case of the prosecution that as a consequence of a protest, the atmosphere in those targeted areas was vitiated to such an extent that a sense of fear was instilled in the people who reside in the area,” asked Justice Mridul.

Pais responded that the chargesheet does not reflect that. He added, “If that is the case, every criminal act will become terror.” The court also said, “We agree even a targeted murder could have a psychological consquence.”

Khalid’s counsel also argued that the chargesheet has “flowery material” against him but there is actually no connection between the offence he is accused of and statements shown as evidence. Pais also submitted that the stringent test for bail under UAPA would not apply to him as there is no material to support the allegations of prosecution.

Pais also argued that the chargesheet tries to obfuscate the acts of one or two with the act of others. “That is the beauty of an omnibus FIR like this. Five people at the same place. Same role attributed, three made accused, two are not,” he added.

On the use of statements like “deeply communal Umar Khalid” and “pretence of atheism” against Khalid in the chargesheet, Pais submitted, “There are various portions like this which attribute communal character, behaviour that is extremely fundamentalist and communal… with absolutely no basis. These are lines just put there to create prejudice”.

Pais, while reading the chargesheet, also submitted that Khalid completely disagrees with Sharjeel Imam’s speech at Jamia Millia Islamia University but “he (Khalid) is being lumped with a person who calls for a deeply communal protest against the CAA, and there is absolutely no ideological meeting of minds between different people who were there at the meeting and supposed to be part of the conspiracy”. Indian Express