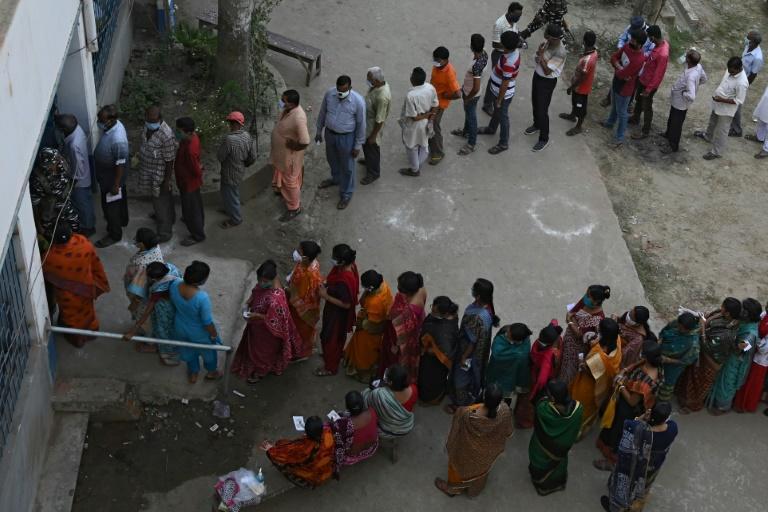 The votes were being held even though India is experiencing a sharp rise in coronavirus infections, with several regions imposing restrictions on activities.

West Bengal in eastern India was the most important, with Prime Minister Narendra Modi’s Hindu-nationalist BJP party attempting to win power there for the first time in what would be a major symbolic victory.

The state, home to about 90 million people, has seen thousands killed in decades of political violence, and the current campaign has triggered deadly clashes between supporters of the BJP and the ruling TMC party.

The TMC, headed by fierce Modi critic Mamata Banerjee, has accused the BJP of attempting to import divisive sectarian politics into the state, which has a large Muslim minority.

On Tuesday two people were killed including the mother of a BJP supporter and a man in his 30s who was a member of the TMC, police said.

Shots were fired outside several polling stations during clashes in areas outside the state capital Kolkata, leaving at least 20 people injured, police said.

Voters were being intimidated into staying away from polling stations “in hundreds of villages”, Dilip Ghosh, a senior local BJP member, told AFP.

Because of the need for extra security, West Bengal has spread its election over eight phases culminating on April 29.

The north-eastern state of Assam, home to 32 million people, was also holding the last out of three phases with the BJP vying to hold on to power.

The state is polarised along ethnic and religious lines, with immigration from neighbouring Bangladesh one of the biggest campaign issues.

A “citizenship list” in Assam state in 2019 left off almost two million people unable to prove they were Indian, many of them Muslims, a process many fear the BJP wants to roll out nationwide.

The southern regions of Kerala, Tamil Nadu and Puducherry also went to the polls, with local parties dominating the race but the BJP hoping to make inroads.

In Tamil Nadu an alliance led by MK Stalin — named by his father after the late Soviet ruler — was aiming to win power with his DMK party.

In Kerala the Left Democratic Front, a coalition including two communist parties, was fighting to retain power against an alliance led by Congress, the BJP’s main national rivals. AFP

Pakistan, China agree to support central role of UN in...