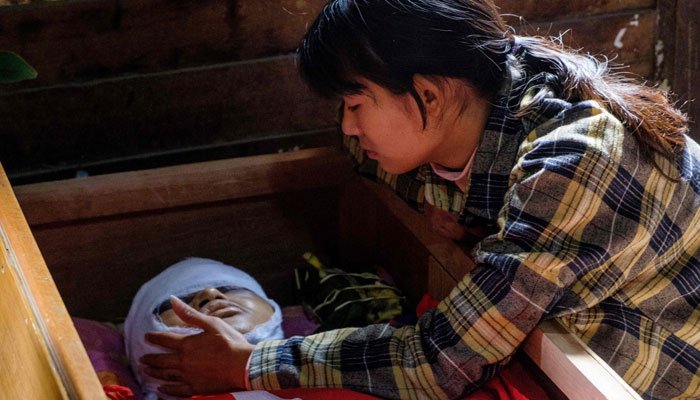 Yangon: The death toll from the military crackdown on protesters in Myanmar has crossed 500, with armed rebel groups on Tuesday threatening the junta to stop the bloodshed or face retaliation.

World powers have ramped up their condemnation of the military’s campaign against the anti-coup movement that is demanding the restoration of the elected government and the release of civilian leader Aung San Suu Kyi.

Washington suspended a trade pact with Myanmar and UN chief Antonio Guterres called for a united global front to pressure the junta after more than 100 protesters were killed in a bloody weekend.

Adding to that pressure campaign, a trio of ethnic rebel groups on Tuesday condemned the crackdown and threatened to fight alongside protesters unless the military reined in its violence.

Daily rallies across Myanmar by unarmed demonstrators have been met with tear gas, rubber bullets and live rounds.

The Assistance Association for Political Prisoners (AAPP) said it had confirmed a total of 510 civilian deaths but warned the true toll was probably significantly higher.

On Tuesday, protesters in Yangon emptied rubbish bags in the streets as part of the latest action, while in the town of Muse in Shan state a 35-year-old protester was shot dead.

There was also another fatality at Myitkyina, Kachin state, rescue workers confirmed.

“If they do not stop, and continue to kill the people, we will cooperate with the protesters and fight back,” the statement said.

If such groups take up arms, Debbie Stothard at the International Federation for Human Rights (FIDH) warned that the situation could degenerate into civil war.

The military has sought to cut deals with some armed groups and earlier this month took the AA off the list of terrorist organisations.

But over the weekend it launched air strikes in eastern Karen state — the first such strikes in 20 years — targeting the Fifth Brigade of the Karen National Union (KNU) after the group seized a military base.

An estimated 3,000 people fled through the jungle to seek safety across the border in Thailand, according to local groups.

“I have never seen it (air strikes) before — I am so afraid,” Naw Eh Tah, 18, told AFP after reaching the Thai side of the border following days of walking through the jungle.

Hsa Moo, a Karen human rights activist, told AFP that the Thai authorities had pushed the people back and accused them of blocking UN refugee officials from the area.

Thai Prime Minister Prayut Chan-O-Cha insisted that there was “no influx” of refugees and that the kingdom´s authorities had not “scared them off with guns or sticks”.

Some Karen people injured in the air strikes sought medical treatment Tuesday on the Thai side of the border — the most serious case was a 15-year-old with a collapsed lung and broken rib.

Thai police said they had intercepted 10 parcels containing 112 grenades and 6,000 rounds of ammunition in northern Chiang Rai province that had been destined for Myanmar’s notorious border town Tachileik.

UN Secretary-General Guterres said the crackdown was “absolutely unacceptable” and urged the Myanmar authorities to undertake a “serious democratic transition”.

US President Joe Biden’s administration announced Monday that the 2013 Trade and Investment Framework Agreement, which laid out ways to boost business but was not a fully-fledged deal, would remain suspended until democracy is restored.

The UN Security Council will meet on Wednesday to discuss the situation, diplomatic sources said, after Britain called for emergency talks.

France condemned the violence as “blind and deadly” and China added its voice to a chorus of international concern on Monday, calling for restraint from all sides.

The US, Britain and the EU have all imposed sanctions in response to the coup and crackdown, but so far diplomatic pressure has not persuaded the generals to ease off.

Meanwhile, Myanmar footballer Hein Htet Aung, who plays for a Malaysian club, has been hit with a one-match ban for flashing the three-finger salute used by anti-coup protesters during a game, an official said Tuesday. AFP