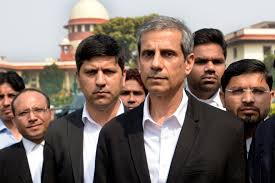 New Delhi: Lawyers, activists and victims of last year’s anti-Muslim violence in the Indian capital have accused the authorities and police of sabotaging the investigation and pressuring them to withdraw the cases.

The office of a prominent lawyer fighting the cases of some victims of the February 2020 violence was raided in New Delhi last month, with legal experts calling it an attack on client-lawyer privilege.

Mehmood Pracha, 56, says he was targeted because he is working on cases that might link Home Minister Amit Shah, the closest aide to Prime Minister Narendra Modi, to the worst violence the Indian capital had witnessed in nearly 40 years.

In February last year, more than 50 people – mostly Muslims – were killed and hundreds of others injured when violence broke out in the city after supporters of the governing Bharatiya Janata Party (BJP) attacked a sit-in against a controversial citizenship law.

Pracha claims the Delhi police – controlled by Shah’s office – raided his office at the minister’s behest.

“The raid was solely for the purpose of destroying these materials so that I cannot expose the role of the home ministry, the Delhi police, and RSS and BJP cadres,” he told Al Jazeera, referring to the Rashtriya Swayamsevak Sangh (RSS), the BJP’s ideological mentor.

“My assassination is also a part of their design,” he said.

However, the BJP rubbished Pracha’s claims.

“People like Mehmood Pracha have phobia of Modi and Amit Shah. What has Amit Shah to do with such administrative issues [police raid]? If he is clean, what is he afraid of?” BJP spokesman Harish Khurana said, accusing the lawyer of “trying to bring himself into limelight”.

Al Jazeera reached out to Nitin D Wakankar, a senior communications official at the home ministry, but could not get a response.

Police accuse Pracha of forging signatures as well as instigating a man to depose falsely in a Delhi violence case, an allegation he terms as “baseless”.

“Their [police’s] aim was to try to snatch away the evidence I have on my computer, given by my clients. The [pieces of] evidence were against the Delhi police and RSS-BJP functionaries who had attacked not only Muslims but all those who protested against the Citizenship Amendment Act,” he said.

Many BJP and RSS leaders had openly threatened the anti-CAA protesters, who organised peaceful sit-ins across the country last year in the biggest protests against the Modi government since he assumed power six years ago.

A day after the police raid on Pracha’s office located in New Delhi’s Nizamuddin area, some victims of the Delhi violence held a news conference, accusing the police of forcing them to submit a statement that the lawyer coerced them to file false complaints.

Pracha says the police’s “threatening behaviour” has also led other lawyers to refuse taking up the cases of the Delhi victims.

“Besides, 95 percent of the cases have not even been registered by the police,” he claimed.

Tamanna Pankaj, another advocate providing legal counsel to the victims of Delhi violence, says police have indicated that lawyers fighting for the victims are under their constant watch.

“Some lawyers are even being involved in the chargesheets and some who were involved in protests were also called by the police for interrogation. They are trapping them in this,” she said.

Many victims of the violence also allege that police are asking them to take back their cases or else “face consequences”.

Sahil Pervez, who lost his father in the violence, said police officers investigating the case asked him to withdraw the case.

Pervez’s testimony earlier had led to the arrest of 16 RSS members, who were charged under various sections of murder and rioting.

“They [police] say if you do not come to terms with us, we will implicate you in other cases. There is a nexus between the police and the actual perpetrators of the violence. Police talk to us as if they are talking on their [accused] behalf,” the 26-year-old said.

“Local BJP member of parliament Manoj Tiwari visited the families of the 16 accused arrested in connection with my father’s death in a bid to express solidarity. In such a situation, how would you expect justice?” Pervez asked.

Another victim, Mohammad Nasir, who received a bullet injury in his left eye during the violence, says the police have not lodged his first information report (FIR) 10 months after the violence, despite orders from a court to do so.

“On the contrary, they [police] keep pressuring me to quit my struggle for justice,” says the 34-year-old.

Nasir says he was visited by a police officer before the raids were conducted on Pracha’s office.

“First, that policeman asked me to change the lawyer. When I refused, he said I would be implicated in other high-profile cases,” he alleged.

The police have been accused by the rights groups and activists of being biased against the victims and sabotaging the investigation into last year’s violence.

When asked to respond to the allegations, the Delhi police remained tightlipped. Assistant Commissioner of Police Anil Mittal, the spokesman for Delhi police, told Al Jazeera he is “not aware” of “such developments”.

A Delhi municipal worker stands next to heaps of the remains of vehicles, steel cupboards and other materials on a street vandalised in February, 2020 violence [File: Altaf Qadri/AP]

‘Accusing Muslims for attacks on Muslims’

“But what is unique about Delhi riots cases is that the police is not only asking the complainants to withdraw their cases but also compelling them to give statements against their lawyers,” Abbas told Al Jazeera.

“They want to give a message that no lawyer should take up such cases or they won’t be spared.”

Police arrested several activists and young Muslim leaders despite the coronavirus pandemic, accusing them of being part of a conspiracy to cause the violence in Delhi.

In its chargesheet filed in September, the Delhi police named 15 people. All of them had opposed the CAA and participated in the protests against the legislation.

Some of them have been charged under the Unlawful Activities (Prevention) Act (UAPA), a draconian “anti-terror” law which allows a person to be jailed for months without bail.

The Delhi Minorities Commission, a state-appointed minority body, last year said the “failure to prevent communal violence was not due to individual or sporadic breaches, but was a pattern of deliberate inaction over several days” by the authorities.

Aasif Mujtaba, another activist who runs a school in Loni – a working-class neighbourhood on the outskirts of New Delhi also hit by the violence – believes police is indulging in a “multipronged approach to indict Muslims” and save the members of right-wing Hindu organisations, who carried out the violence and whose videos and statements were widely shared on social media.

“They are making Muslims as accused for attacks on Muslims,” Mujtaba told Al Jazeera. “They invoke mild charges against the Hindu accused but put stringent charges in cases against Muslims.” Al Jazeera

Modi clamped down complete communication blockade in IIOJK with draconian...