Subscribe Us
HomeInformation‘Denial of right to self-determination cause of Kashmir dispute’
Information, NGO 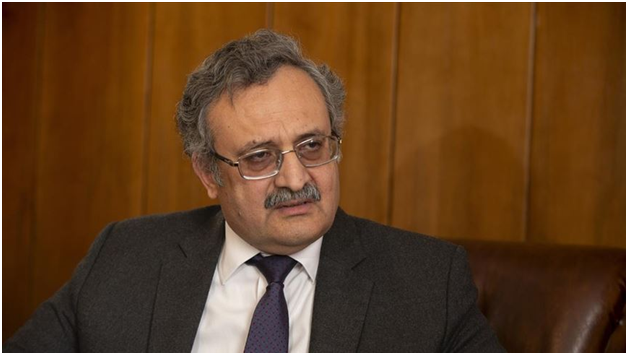 Pakistan’s ambassador to Turkey has said that the UN Security Council holding three meetings on Kashmir since Aug. 5, 2019 negates the Indian notion that the disputed region is its “internal matter.”

Last August, the Indian government revoked special provisions of Articles 370 and 35A from its Constitution, scrapping the country’s only Muslim-majority state with its nominal autonomy.

As a party to the dispute, ambassador Syrus Sajjad Qazi says Pakistan will continue to fulfill its obligations.

Anadolu Agency interviewed him ahead of Oct. 27 — the day Indian armed forces entered the disputed Himalayan region in 1947. It is marked as a “black day” by Kashmiris worldwide. Excerpts:

Qazi: On this day 73 years ago, Indian forces landed in Srinagar to occupy and oppress the innocent people of Kashmir in a blatant violation of international law. This day marks the beginning of one of the most protracted disputes of modern times that remains on the agenda of the UN Security Council to this day.

The denial of the right to self-determination to the Kashmiris remains at the very heart of this dispute.

In these seven decades, [Indian-administered] Kashmir has become one of the most militarized zones in the world, where Indian occupation forces have committed massive human rights violations, widely known to international community. These violations have been documented by international media as well as in two reports of the UN High Commissioner for Human Rights in 2018 and 2019.

Q: What is the status of various UN resolutions on Kashmir?

Qazi: The Jammu and Kashmir dispute between Pakistan and India has been on the agenda of the UN Security Council since January 1948, when India first took the matter to the UN.

A series of resolutions, including Resolutions 47 of (1948), 51 of (1948), 80 of (1950) and 91 of (1951) underlined the principle that “the final disposition of the State of Jammu & Kashmir will be made in accordance with the will of the people expressed through the democratic method of a free and impartial plebiscite conducted under the auspices of the United Nations.”

Both Pakistan and India accepted this prescription but India later went back on its pledge, and since then has used all manner of trickery and force to avoid holding the plebiscite.

India’s attempts to unilaterally and illegally alter the status of the disputed territory in contravention of the international law are not new, and have been rejected unequivocally by the UN Security Council in the past as well. For instance, UNSC Resolutions 91 and 122 adopted in 1951 and 1957, respectively, pronounced on the illegality of India convening a constituent assembly and its fraudulent decisions.

Similarly, India’s illegal and unilateral actions on Aug. 5, 2019 to strip Jammu and Kashmir of its autonomy are also in violation of these resolutions.

The Security Council and the UN secretary-general are legally and morally obliged to secure implementation of the binding UN resolutions and agreements on Jammu and Kashmir to which they are a party. The UN chief has reaffirmed the validity of these resolutions in August 2019.

Q: India insists that entire Kashmir is its integral part, despite the UN urging both Islamabad and New Delhi to solve the dispute. How does Pakistan react?

Qazi: India has tried to justify its illegal and unilateral actions of Aug. 5, 2019 as purely a “domestic issue.” This is in the tradition of all occupying and colonizing powers since they have nothing else to say to justify their illegal and immoral actions.

However, as I have said earlier, the UN secretary-general, in his statement on Aug. 8, 2019, categorically stated that the “the position of the United Nations on this region is governed by the Charter of the United Nations and applicable Security Council resolutions.” The Security Council resolutions clearly treat Jammu and Kashmir as a disputed territory.

The UNSC has discussed the situation of Jammu and Kashmir three times since August 2019, which further negates the false Indian assertions that it is an internal matter of India.

We are also extremely grateful for Turkey’s principled position and continuous support on Jammu and Kashmir dispute, particularly President Recep Tayyip Erdogan highlighting the Kashmir Issue in his address during the 75th session of UN General Assembly.

Q: Is the world is listening to Pakistan and Kashmiris, given that your government has tried to raise the issue on multiple forums?

Qazi: Like all occupying powers, India has attempted to deny access to the world in its occupied territory. There are several pending access related requests from various UN mechanisms. At the same time, India has tried taking away every outlet through which the Kashmiris could express themselves. Just a few days ago, Indian authorities sealed the offices of leading English language dailies, the Kashmir Times, and Kashmir News Service.

Despite that, global parliaments, international human rights organizations as well as the international media have been vocal in their condemnation of the ongoing military siege, communications blockade and curfew imposed by the Indian occupation forces, particularly after Aug. 5, 2019.

In October alone, 18 unarmed and innocent Kashmiris have been martyred by Indian troops. During the same period, over 40 young Kashmiris were severely injured due to unprovoked and indiscriminate use of live ammunition, pellet guns and other military grade weapons.

All these reports are coming out in the media.

Voices from around the world also continue to condemn the gross human rights violations and unprecedented restrictions in [Indian-administered] Kashmir.

On Oct. 20, UN High Commissioner for Human Rights Michele Bachelet expressed concerns over the arrest of hundreds of human rights activists and restriction on the work of human rights bodies in India.

The International Federation of Journalists in Asia-Pacific has also expressed its deep concerns over intimidation of independent media voices in Kashmir.

I believe, Indian attempts to stifle the Kashmiri voices will only further strengthen the resolve of the Kashmiri people.

Q: Pakistan’s adviser on national security recently revealed that India proposed to hold talks. In what conditions can a Indo-Pak dialogue commence?

Qazi: Pakistan is a peace-loving nation and wants to forge peaceful relations with all its neighboring countries. However, onus of creating an enabling environment is on India by rescinding its illegal and unilateral actions, ending its state-terrorism against the Kashmiri people, stopping the ongoing demographic changes and agreeing to resolve the Jammu and Kashmir dispute in accordance with the relevant UN Security Council resolutions and the wishes of the people of Kashmir.

It is India that has vitiated the atmosphere with its illegal and unilateral actions of Aug. 5, 2019, and with its continuous, belligerent rhetoric.

India must realize that normal relations with its neighbors remain contingent upon India beginning to act normally.

Q: What is Islamabad’s strategy to fulfill what it calls “aspirations of the people of Kashmir”?

Qazi: The Government and the people of Pakistan remain steadfast in their adherence to the Security Council resolutions and in our strong political, moral and diplomatic support to the right of the Kashmiri people to self-determination.

Pakistan continues to highlight the grim human rights situation in [Indian-administered] Kashmir at all relevant international forums, including the United Nations, and the human rights and humanitarian organizations.

In his statement during the 75th session of UN General Assembly, the prime minister of Pakistan also drew the world’s attention to India’s illegal unilateral actions of Aug 5. 2019 and the human rights violations perpetrated by India in the disputed region, particularly imposition of military siege, a total communications blackout, indiscriminate use of pellet guns, and extrajudicial killings in fake encounters.

Pakistan will continue to fulfill its obligations as a party to the Jammu and Kashmir dispute.

It is unfortunate that Turkey is being targeted by Indian media, which is world’s top purveyor of fake news working in cahoots with the Hindutva regime.

Indian media has become a mouthpiece of extreme xenophobic and rabid hyper-nationalistic sentiments. The malicious propaganda is also a manifestation of rising Islamophobia in India that is targeting not only Kashmiris and the Indian Muslims, but also other Muslim countries that sympathize with the suffering of the Kashmiris and raise their voice in their support.

India cannot wash away the truth about its gross and systematic human rights violations in Kashmir, and its Islamophobic policies through peddling fake news and running its propaganda machinery overtime against third countries. Anadolu Agency