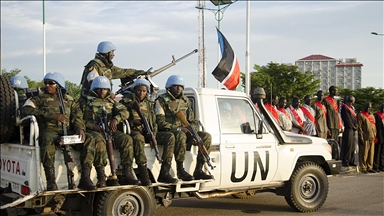 Juba: Several UN peacekeepers were injured during an internal brawl when 15 peacekeepers in South Sudan, originally from Ethiopia’s restive Tigray region, refused to return to Ethiopia a UN official said.

Kirk L. Kroeker, a spokesman for the UN Mission in South Sudan (UNMISS), told Anadolu Agency Tuesday: “169 members of the Ethiopian contingent were due to rotate out of [the capital] Juba today and to be replaced by a fresh deployment as part of the normal UNMISS rotation of peacekeepers. While still to be verified, it is reported that approximately 15 members of the contingent chose not to board the flight at the Juba International Airport and a scuffle broke out, resulting in some minor injuries.”

Kroeker said these contingent members are now receiving support from the South Sudanese commission for refugee affairs and UNHCR.

“Individuals in need of international protection, anywhere in the world, can choose to seek asylum through their own free will, under international law,” he said.

“This is a human right. Any process of asylum will be managed by the Government of South Sudan with support from UNHCR.” Kroeker said, and praised the service of the Ethiopian peacekeepers.

Kroeker said the Ethiopian contingent has provided a highly professional peacekeeping service in support of the people of South Sudan.

Pro-government troops took control of the regional capital Mekele in late November, but the TPLF vowed to fight on, and clashes have persisted in the region, hampering efforts to deliver humanitarian aid.aa.com.tr