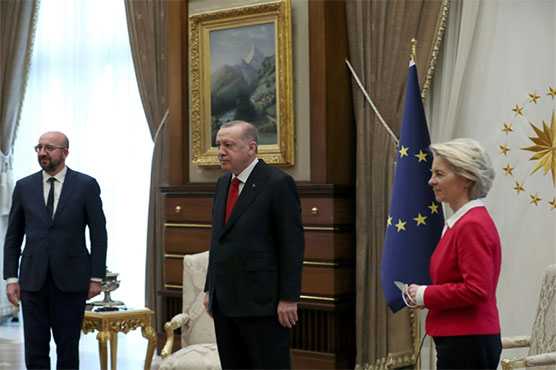 Ankara: The European Union s top two officials expressed deep worries about rights in Turkey while voicing hope for stronger ties in their first meeting in a year with President Recep Tayyip Erdogan.

Tensions have spiked over Turkey s hunt for gas in disputed eastern Mediterranean waters and an aggressive foreign policy push across North Africa and the Middle East.

But the Turkish leader softened his rhetoric as the threat of EU sanctions escalated and US President Joe Biden replaced Erdogan s friend Donald Trump in the White House.

EU officials said von der Leyen and Michel wanted to lay out the terms for Erdogan on which they expected to build better relations with the bloc s strategic southeastern partner.

The two emerged after nearly three hours of talks to stress they had pressed Erdogan hard on Turkey s deteriorating rule of law and crackdown on civil and political rights.

“Human rights issues are non-negotiable,” said von der Leyen. “They have absolute priority without any question.”

Michel said the two had “shared with President Erdogan our deep worries on the latest developments with Turkey in this respect, in particular on the freedom of speech and the targeting of political parties and media.”

An official in Brussels said after the meeting “there will be no acceptance by member states and their public opinions for a positive agenda with Turkey” without an improvement on rights.

Erdogan did not address reporters but his office issued a statement reaffirming Turkey s position that it wanted the EU “to take concrete steps to support a positive agenda”.

“The final objective of Turkey s EU process is full membership,” Erdogan s office said in reference to accession talks that have been frozen over the past decade.

EU officials countered that any improvement depended on how Erdogan — who was leader when Turkey formally opened talks to join the bloc in 2005 — acts and whether he remains a constructive partner.

Von der Leyen and Michel took pains to underline the crucial role Turkey has played in stemming Europe s refugee crisis by setting up shelter for roughly four million of people from Syria and other conflict zones.

Turkey received millions of euros in aid under the 2016 agreement and von der Leyen said she was prepared to update the deal s terms. “A revised Turkey-EU migration deal together with the main provisions contained therein would go a long way towards addressing the refugee problem and revitalising Turkey-EU relations with a positive agenda,” she said. AP

Turkey court sentences 22 to life in full verdict of...