Subscribe Us
HomeArticle“Exclusion, segregation and atrocity”: How the State oppresses Dalit women
Article 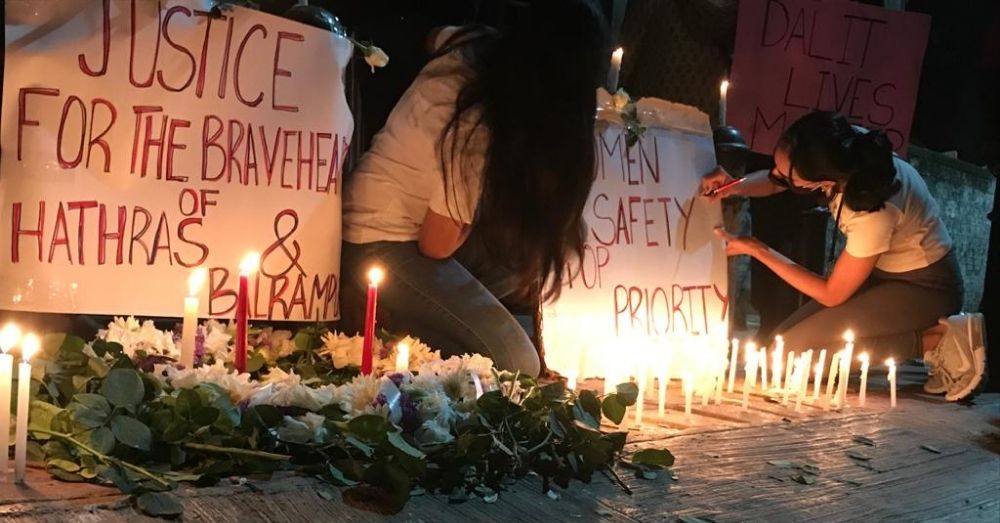 The violence, insensitivity and apparent impunity that was witnessed in Hathras case highlight, yet again, the deeply rooted oppressive caste hierarchy that seemingly legitimizes such acts of violence in our society.

Protests against the Hathras rape.

Caste in India has historically regulated conduct through “exclusion, segregation, and atrocity.”

Among Indian women, Dalits, Adivasis, and backwards-caste women are the most oppressed. The recently released National Crimes Records Bureau data for 2019 shows that almost 10 Dalit women and girls are raped every day across the country. There were 3486 reported rape cases against Dalit women and girls registered with the police in 2019, which is a significant increase from 2936 cases in 2018.

However, even these numbers are considered to be gross underestimates, as the majority of the caste-based cases of sexual violence are underreported. The oppression that Dalits and other backward class women face aggravated forms of violence as they occupy a space at the intersection of caste, class, and gender.

As Susan Brownmiller has rightly pointed out, “Rape is not a crime of irrational, impulsive, uncontrollable lust, but is a deliberate, hostile, violent act of degradation and possession on the part of a would-be conqueror, designed to intimidate and inspire fear.” Every time Dalits have challenged the hierarchical structures of caste by indulging in acts of resistance, they have been subjugated and oppressed through various forms of violence, sexual violence being one of them.

The dignity of Dalit women is violated to shame the whole community. These are not isolated incidents of violence but a form of structural oppression against Dalits by the upper caste.

Every time there has been a caste atrocity against women in the form of rape and/or sexual violence, the prevailing caste hierarchies have been clearly visible. For instance, in February 2020, a local Dalit leader organised a programme called BhimKatha in Mangta village, Uttar Pradesh, which angered the upper caste men. They saw it as a threat to the existing caste structure. In response, on February 12, 2020, several Dalit families were attacked with lathis and hammers and several women and children were injured.

Similarly, in another incident, a Dalit woman who had gone to relieve herself in the morning was attacked and raped by an upper-caste man. He abused her by calling her “Chamaran” and said, “If I don’t stop you people from using the name Bhim, I am not a Thakur.”

In 2015, a Dalit man eloped with a married woman from the Jat community, which is a forward caste. This angered the Jats in that village and The Khap panchayat ordered the Dalit man’s sisters’ to be raped and paraded naked as revenge for the actions of their brother. These series of incidents of violence demonstrate how commonplace such occurrences are in our society, and hence there is an impending necessity for greater scrutiny on the part of the state.

It is evident that institutional denial and invisibilization of the question of caste is prevalent. Representational image.

The Judiciary has often failed to observe the required degree of sensitivity that ought to be exercised in cases wherein caste and gender-based violence intersect. Such an attitude is reflected in several decisions of courts. For example, in the case of Pappu Khan v. the State of Rajasthan, a truck driver raped one of four girls he had offered a ride to from the local bus stand. He was charged under S. 376 of IPC and S. 3(2)(v) of the Prevention of Atrocities Act. The Rajasthan High Court found him guilty of rape but acquitted him under the atrocities act.

The reasoning that the court provided was that there was no substantial evidence to prove that the accused had raped the girl because she was from a Tribal community. There have been numerous similar cases.

The Khairlanji massacre from 2006 perhaps best illustrates the underlying themes which are common to these cases. In this case, four members of a Dalit family were abused, attacked, paraded naked, gang-raped, and murdered in public. The sons were asked to rape their mother and sisters, and when they refused, they were mutilated. The women were then gang-raped and objects were shoved into their private parts. However, no FIR was registered.

The attitude of the police was very casual and they were unwilling to even start the investigation. It was only after a month-long protest by the Dalit activists that the police finally took action. Pieces of evidence were fudged and misinformation was spread. The character of the survivor was maligned to justify the murder. These incidents establish how caste-based violence has been used as a retort against Dalits to protect and promote caste hierarchy. Youthkiawaz