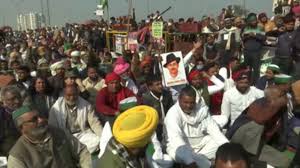 Other prominent accounts on the list belonged to some opposition leaders, an actor and an economist.

Sources at India’s IT ministry told media outlets at home and abroad, albeit off the record, that the government had directed the social media giant to act against specific accounts and tweets that posed a “grave threat to public order.”

However, global media watchdog Reporters Without Borders condemned the action, calling it a “shocking case of blatant censorship”.

“By ordering these blockings, the Home Affairs Ministry is behaving like an Orwellian Ministry of Truth who wants to impose its own narrative about the farmers’ protests,” the group said.

Late last week, authorities detained freelance journalist and contributor to The Caravan Mandeep Punia from Delhi’s Singhu border, where farmers have been protesting for over two months. He was accused of being a part of a scuffle that took place seven hours before he was arrested.

Support poured in for Punia as fellow journalists staged a protest outside police headquarters against his arrest. They said he was being targeted for his reporting on the farmers’ protests.

Another journalist, Dharmender Singh, was also detained but allowed to go after he showed his identity card to the police.

“Such crackdowns impinge on the media’s right to report freely and interferes with our right to freedom of expression, and freedom of the press as guaranteed by the Constitution of India,” several press bodies said in a joint statement.

The detention of the journalists comes soon after sedition cases were filed against prominent journalists Rajdeep Sardesai, Mrinal Pande, several editors at The Caravan, as well as opposition politician Shashi Tharoor, for their comments following the Republic Day violence.

They face legal difficulties for saying that a protester who died on January 26 was killed by police. Police say he was not shot and that he died after his tractor overturned. However, his family disputes this and says he lost control of his vehicle after being shot.

Protests heated up on Republic Day

The farmers have camped outside Delhi for over two months, demanding the repeal of three agriculture laws passed by Prime Minister Narendra Modi’s government in September last year.

Largely peaceful protests descended into violence early last week, on India’s Republic Day, when some farmers broke police cordons and were then met with tear gas and baton charges.Dw.com

The anti-Dalit, anti-Adivasi Features of the 2020 Indian Citizenship Amendment...