The anti-Dalit, anti-Adivasi Features of the 2020 Indian Citizenship Amendment Act 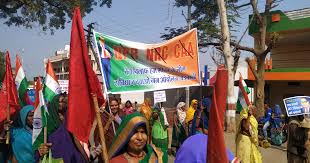 Muslims, Dalit organisation and other political party members are seen on road as they stopped traffic in their mass protest against government’s new policy on CAA, NRC and other citizenship acts in the eastern Indian state Odisha’s capital city Bhubaneswar on 30 January 2020. Photo by STR/NurPhoto via Getty Images.

The document is a privilege. In India, a person with no history of property ownership or registration in the form of a birth certificate cannot fulfill the requirements of the citizenship register. My grandmother, an unlettered Dalit woman, worked as a toilet cleaner in the houses of landlords, as a farmworker, and as a midwife. She never had any piece of documentation.

The Citizenship Amendment Act, 2019 (CAA) targets Dalits and Adivasis because they operate on the peripheries of state biopower. Together with the National Register of Citizens (NRC), the CAA forces people to prove their legal citizenship status with documents they do not possess, which is likely to push them and their succeeding generations into catastrophic situations. The Act therefore negates the constitutional responsibilities of the state to ensure the welfare of oppressed groups in India. In this way, the CAA does not just harm these groups, but profoundly alters the state’s constitutional foundations and responsibilities. It is another step towards remaking the Indian republic into a Hindu Rashtra—a Brahmin Republic of Broken Castes that prioritizes Brahmins at the top followed by Kshatriyas, Baniyas, Shudras and Ati-Shudras in the reverential vertical order of Varnashrama Dharma, disadvantaging the Dalits the most.

In its demand for documentation, the CAA disenfranchises not only Muslims, but also Dalits and Adivasis—who are historically landless and undocumented. In this piece, I argue that the CAA’s demand for documentary proof disenfranchises an already oppressed community, while ostensibly absorbing these groups as part of a nationalist Hindu Rashtra. This harassment is a continuous, frustratingly painful oppression. The existential threat of death is constant, but enduring the pain is brutal. Harassment is a political weapon that enhances the government’s ability to control everyone in its sight. By leveraging a power to harass someone, the state manipulates its subjects into subservience to its mighty authority.

The government’s attempts to alter the fundamental structures of the Constitution by making religion a qualification for citizenship constitutes a specific threat to Dalits and Adivasis (officially categorized as Scheduled Castes and Scheduled Tribes (SC/ST)). [1] Many religious and spiritual practices of Adivasis and Dalits do not fit into the categories outlined in the CAA (Hindu, Sikh, Buddhist, Jain, Parsi and Christian). They are thus left with the choice of identifying with one of these religions, thereby losing their ancestral, historical identity, or losing their citizenship.

With the CAA, the BJP ostensibly incorporates SCs/STs/OBCs into a Hindu nationalist “whole.” But in reality, the CAA further undermines the constitutional rights and entitlements of Dalits and Adivasis as well as Muslims, and thus transforms the constitutional foundations of India.

Constitutionally, the state is required to work toward the welfare of these disadvantaged communities who have suffered from centuries of discrimination. However, the CAA’s excessive premium on documentation systematically disenfranchises and deprives Dalits and Adivasis of their constitutional rights to services. The negative impact of the CAA is felt acutely by these groups, which have been historically on the margins of the Indian society and whose lives continue to be shaped by the policies of the post-colonial state. Apart from the reservation policy, the state offers very few additional welfare measures to protect SC/ST populations.

To claim even these few welfare benefits, people need valid documents to authorize their eligibility. Because Dalits and Adivasis rely on the state to survive, withdrawals of state support due to lack of documentation literally threatens their lives and continues their marginalization. This marginalization works through insufficient budgetary allocations as well as improper implementation of welfare policies. Imagine a scenario where people are denied the benefits of policies designed for their welfare, due to an absence of “valid” documents. This is unfortunately a regular occurrence in the social welfare departments of a majority of states in India.

The government deploys anti-Muslim rhetoric to detract from its fundamental responsibilities to SC/STs, for two reasons. First, it is easy to single out Muslims as Others because they cannot be easily absorbed into the Hindu fold. Second, this rhetoric consolidates SCs, STs, and Other Backward Castes (OBCs) into a unified Hindu bloc and pits them against Muslims instead of focusing on government’s failures both to protect SCs and STs from atrocities, and to provide constitutionally mandated welfare programs. For example, scholarships for SC/ST students studying in universities have been drastically reduced under this regime. The infamous institutional murder of Rohith Vemula, rampant arrests of Dalit youth during the post-Rohith Vemula agitation, and during the 2018 protests against the Supreme Court’s ruling to dilute the Prevention of Atrocities Act explicate the anti-SC/ST agenda at the center of the current government’s actions.

Direct violence and state policy intensify SC/ST/OBC dispossession, such as increasing incidents of cow vigilante attacks on Dalit tanners and leather workers, the government’s 13 point roster system for faculty recruitment in universities which curtails representation of SC/ST/OBC candidates, as well as abominable legislations like the Forest Rights Act which strips Adivasis’ rights over the forest, and displaces 8 million people from their constitutionally guaranteed rights over scheduled forest.[2]

Meanwhile, the judiciary continues to compromise the constitutional rights by approving these dispossessions. A recent Supreme Court ruling curtails promotions in reserved jobs. In February 2020, a bench headed by Justice L Nageswara Rao and Hemant Gupta (respectively, an Andhra Pradesh Brahmin and Punjabi Baniya) overturned the 2012 Uttarakhand High Court ruling that directed the state to provide quotas to specified communities. Similarly, another judgment authored by Justice Arun Mishra, a Madhya Pradesh Brahmin, and signed by Justices Indira Banerjee, Vineet Saran, M.R. Shah, and Aniruddha Bose, made the abominable claim, without citing empirical proof, that “there are affluent and socially and economically advanced classes within Scheduled Classes and Scheduled Tribes,” raising the question of “worthiness for entitlement.” The same judgment labeled tribals as “primitive” people whose “way of life makes them unfit to put up with the mainstream and to be governed by the ordinary laws.” These racist and casteist characterizations by the top court reflect the mindset of judicial Brahmins. Justice Mishra is the same judge who, along with Justices Indira Banerjee and Navin Sinha, passed the disgraceful order to evict 1.2 million Adivasis who could not prove their claims to their land. Why could the Adivasis not prove their entitlement? Because they did not have documentation.[3]

In addition to these actions, the government’s lax response to the 2018 Supreme Court order undermining the Prevention of Atrocity Act, despite growing atrocities against Dalits, also speaks to the corrupt nature of the judicial system. The failure of the government to act on this matter is potentially be cataclysmic. Thus, to detract attention from devastating outcomes, the ruling BJP party communalizes SCs, STs, and OBCs to pit them against poor Muslims, who also suffer discrimination.

This plays well into the hand of state efforts to absorb SCs, STs, and OBCs into its agenda of Hindu Rashtra. As the government makes these groups vulnerable under the document regimen, the state distracts from these actions by demonizing Muslims, who are presented as threats to the rights of SCs, STs and OBCs. This also plays into the rapacious mélange of the government’s coordinated anti-constitutionalism and anti-secularism. In the government’s anti-Muslim rhetoric, oppressed caste Muslims (who are mostly converted Dalits, Adivasis and OBCs) remain overwhelmingly affected due to their precarious class and caste status[4]. Furthermore, the Hindu-Muslim[5] binary creates a subtle space for the bigotry to proceed, while Dalits and Adivasis continue to operate beyond the radar of the liberal and radical politics of Savarna Hindus and Ashraf Muslims. The latter, of course, gave rise to barely functional ethno-states in the region while maintaining Dalits as inflexible subordinate subjects.

That the real face of the documentation regime is anti-Dalit, and anti-Adivasi, was proven in the case of Assam’s administering of the NRC. Of the 1.9 million people excluded from the NRC, 1.2 million were non-Muslim, which means they were SC, ST and OBC, in addition to the General list of castes. The BJP government in the state of Assam sent notices to those rejected from the NRC list.[6]

The outcome of this rejection is that many Adivasis and Dalits were rendered stateless, displaced from their homelands, and forced into detention centers. This, in turn, creates opportunities for corporate capital intruders and private individuals who want to take over the resource rich, sacred lands of Adivasis, which were secured as their right under the Constitution. The same lobby wants to deprive Dalits of their rights and protections at workplaces and undermine educational opportunities through aggressive privatization. That is precisely how the CAA has to be seen in light of the SC/ST’s right to the country. By amending the 1955 provisions of the Constitution, the state successfully focuses attention on Muslims while it remains invested in overtaking the resources that the Constitution protects. The CAA, then, becomes a way to attack the SCs and STs while not aiming the gun at them.

Dr. Suraj Yengde is currently a senior fellow at the Harvard Kennedy School and an inaugural postdoctoral fellow at the Initiative for Institutional Anti-racism and Accountability (IARA) at Harvard University.polarjournal.com