Farmers’ agitation is acquiring the character of another freedom movement 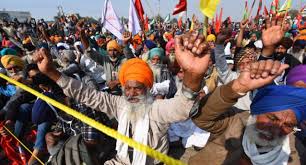 New Delhi: After 40 days of peaceful non-violent satyagrah, a situation reminiscent of the famous 1942 “Do or Die” movement launched by Mahatma Gandhi is fast emerging on the political horizon with the farmers’ not willing to accept anything other than scrapping of the three farm laws and providing legal status to the MSP.

If it was the reluctance of the Britishers to listen to the Indian voice that forced Mahatma Gandhi in 1942 to give the call for ‘quit India movement’, this time it is the arrogance of the government not to concede to their demands that has forced the farmers to announce plans to hold their own Republic Day ‘parade’ in Delhi.

The farmers plan to organise the twice-rescheduled tractor rally on the KMP (Western Periphery) Expressway as practice for the ‘parade’. On January 23 — the birth anniversary of Netaji Subhas Chandra Bose — farmers across the country will march to their respective Raj Bhavans since the governors represent the Central government in the states.

Though the Modi government has been inviting the farmers to the table to discuss their problems, it remains obstinate not to accept their pleas. So far seven rounds of talks have been held, but shockingly, the government has not shown any eagerness to find a solution.

The failure of the seventh round of talks held on January 4 did not come as a surprise. It was along expected lines; Modi government would not agree to the proposition to repeal the contentious laws. This has been the part of the strategy to frustrate, exhaust and break the morale of the farmers. Once they are exasperated, they will abandon their agitation and go back to their villages, the govt seems to feel.

Though the Agriculture Minister announced that the 8th round of discussion will take place on January 8, going by the mood and posture of PM Narendra Modi, it can safely be said that it would also prove to a futile exercise. The government is trying to engage the farmer leaders in psychological war and is using all kind of intrigue to enervate them.

The farmers’ leaders have also made it absolutely clear that “we will not agree to any alternatives”. It is indeed shocking that the Modi government is pushing its own people to the wall and forcing them to resort to a protracted struggle. While the Modi government has been maintaining the façade of engaging the farmers in dialogue, farmers’ organisation All India Kisan Sangharsh Coordination Committee (AIKSCC) has accused that the police in Haryana was resorting to violent action against them.

Meanwhile, thirty-five students of Panjab University have written to Chief Justice of India (CJI) S A Bobde and other judges of the Supreme Court seeking an inquiry into alleged police atrocities on the farmers protesting at Delhi borders against the three farm laws. In the open letter, the students of the Centre for Human Rights and Duties of the university have alleged that there has been “illegitimate use of water cannons, tear gases shells and lathis on peaceful protesting farmers” by police authorities which needs to be probed.

With the Modi government determined not to accede to the farmers’ demands of not allowing unregulated private ‘markets’ in competition with APMCs; giving a legal guarantee for MSP; and, not allowing the entry of corporates into purchase of and trade in agricultural produce, the farmers’ are left with no other alternative but to continue to struggle. This is perhaps for the first time that Independent India has been witnessing this nature of complete non-violent, peaceful protests during which 57 innocent farmers have passed away at the protest site.

The most shocking scenario has been that while the farmers wept at the death of each farmer, the ministers participating in the deliberations were unmoved. It is indeed a matter of shame that the government does not feel guilty. For it the farmers who died in the chilly winter did not count as human beings.

Nevertheless, the agitating farmers have posed a question for the Prime Minister. What are the disadvantages of withdrawing the new farm laws and who stands to lose if they are withdrawn? While the farmers reiterate that they do not need such laws, PM Modi is insistent that you ought to have these as these are for your welfare. It is an open secret that he has been thrusting these laws down farmers’ throat to serve the interest of his corporate friends, particularly Adanis and Ambanis. Nonetheless he ought to realize that by maintaining silence he is pushing the country into a black hole. He is ruining the future of the next generation.

Modi claims that these laws will transform farmers’ lives. If he is so confident, then why is he evading them and does not sit with them across the table and explain their benefits to them?

Farmer union leaders have warned the government that it should not take their agitation lightly and think that it can be handled like the Shaheen Bagh protests against CAA. The warning came a day after the younger generation of protesters gathered at Shahjahanpur on the Rajasthan-Haryana border and pushed their way past police barricades.

SKM leadership also cautioned that the collective leadership of the movement might not be able to rein in the youngsters if the government continued to test their patience. While the blockade of Delhi will continue, they will broaden the movement by mobilising opinion across the country with a “Desh Jagriti Abhiyan”. Nationalheraldindia.com