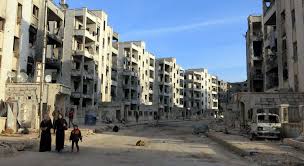 “Identified gaps, inconsistencies and discrepancies” that remain unresolved, have brought into question the true extent of the elimination of chemical weapons during Syria’s bloody conflict, the UN disarmament chief told the Security Council in her briefing.

The High Representative for Disarmament Affairs (ODA), Izumi Nakamitsu, said that the declaration that Syria had submitted on its chemical weapons status “cannot be considered accurate and complete in accordance with the Chemical Weapons Convention (CWC)”.

“Until these outstanding issues are closed, the international community cannot have full confidence that the Syrian Arab Republic’s chemical weapons programme has been eliminated”, she spelled out.

The Prime Minister of Tunisia took the gavel, as his country holds the Council presidency through January, while Ms. Nakamitsu briefed ambassadors on the implementation of resolution 2118 where unanimous agreement was reached in 2013 to condemn “in the strongest terms” any use of chemical weapons in Syria.

Despite the impact of COVID-19 on the ability of the Organization for the Prohibition of Chemical Weapons (OPCW) to deploy to Syria, its Technical Secretariat has continued with its mandated activities, the UN Official told the ambassadors.

She also explained that a fact-finding mission (FFM) in the country is investigating allegations of chemical weapons use regarding a “variety of incidents” and noted that further FFM deployments “will be subject to the evolution of the COVID-19 pandemic”.

Meanwhile, the OPCW’s Investigation and Identification Team (IIT) continued probing into FFM-determined incidents in which chemical weapons were used or likely used in Syria.

There is no justification for the use of chemical weapons by “anyone, anywhere and under any circumstances”, the UN disarmament chief told the Council.

“The use of such weapons with impunity and without accountability is a threat to international peace and security and a danger to us all”, she said. “It is, therefore, imperative to hold accountable all those who have used chemical weapons”.

Ms. Nakamitsu reiterated her “full support for the integrity, professionalism, impartiality, objectivity and independence” of the OPCW’s work and said that the investigation team would “issue further reports in due course”.

“As we start the new year, I state my sincere hope once again that members of this Council will unite on this issue”, she said, adding that ODA “stands ready to provide whatever support and assistance it can”.

In closing, the High Representative echoed the end of the year message of Secretary-General António Guterres: “Together, let’s make peace among ourselves and with nature, tackle the climate crisis, stop the spread of COVID-19, and make 2021 a year of healing”.news.un.org

Farmers’ agitation is acquiring the character of another freedom movement