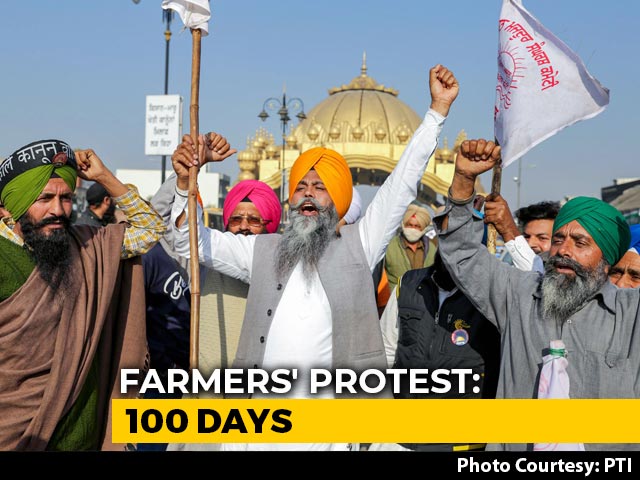 New Delhi: The Indian formers protesting on the borders of New Delhi are marking ‘Black Day’ today – the 100th day of their protest.

The Samyukt Kisan Morcha, an umbrella organisationof various farmer bodies, has given a call to block highways and to free the toll plazas near the highways, which are to be blocked, and wave black flags from offices and residences across the country.

After staging protests in their respective regions for weeks, the farmers from Punjab and Haryana moved towards the Indian capital with their “Delhi Chalo” march in November 2020. Since the 26th of that month, they have been camping at various border points such as Singhu and Tikri. They were joined a few days later by farmers from Uttar Pradesh who settled at Ghazipur.

Among other things, they have demanded the unconditional repeal of three farm laws enacted by the Indian Parliament in September. The protesters say that laws would pave the way for the abandoning of the minimum support price system, leaving them at the mercy of big corporates.

Several rounds of talks between representatives of farmers and the government have so far ended unsuccessfully.

Today marks a crucial point in the protest. “We are completely prepared. Unless and until the government listens to us and meets our demands, we will not move from here,” Rakesh Tikait of the Bharatiya Kisan Union (BKU), who is among the leaders at the forefront of the movement, told media.

The movement’s impulse has already left its mark on regional politics – with most parties backing the farmers. For instance, the Shiromani Akali Dal of Punjab, from where most of the protesters are, quit the ruling NDA at the Centre in September itself. Yet, it couldn’t stop the Congress’s spectacular performance in the urban body polls held last month. Similarly, in neighbouring Haryana, the Indian National Lok Dal quit the NDA even though the move was more symbolic than influential.

In the meantime, over 200 farmers have died due to varies reasons such as extreme weather conditions, by suicide, and of hunger amid the protests.

The protests have also sparked international interest – and condemnation – as celebrities such as pop singer Rihanna, and climate change activist Greta Thunberg voiced their support for the protesters. CBS News.

Anti-coup protests continue in Myanmar as UN urged to hear...