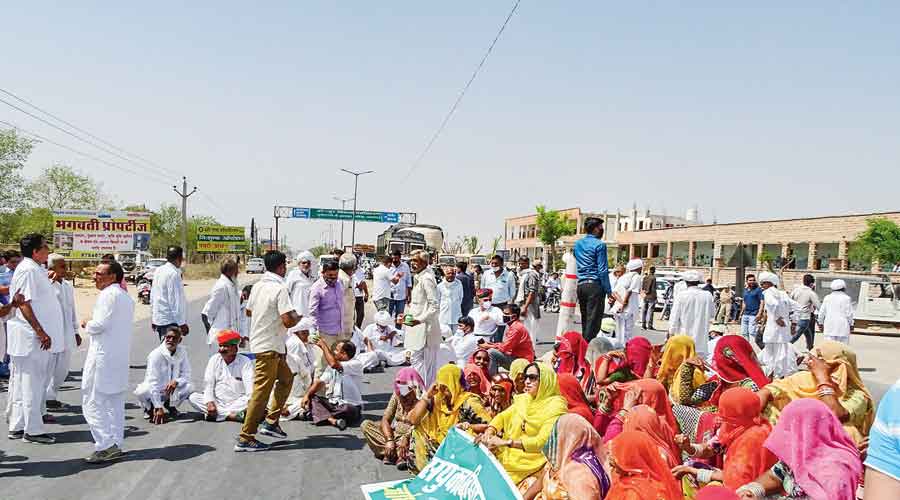 Gujrat: A leader of the Samyukta Kisan Morcha was dragged away by Gujarat police from a news conference he was addressing in Ahmedabad on Friday afternoon, as the protest against the three farm laws at Delhi’s borders completed four months.

“This is what we came to expose. There is no democracy in Gujarat. No one has the right to speak their mind. There is an undeclared emergency,” Yudhvir Singh of the Bharatiya Kisan Union (Tikait) told television channels, after the police in the BJP-ruled state arrived at the venue to stop the news conference and detain Yudhvir and seven other farmer leaders.

A police officer said on camera that the news conference was stopped because there was no permission for it.

“Why do we need permission to talk to the media?” Yudhvir asked.

Yudhvir added that in a democracy, everyone has the right to present their views. “This is our country as much as it is theirs,” he added.

The police told some reporters permission was required because the news meet was related to the Bharat Bandh that the Morcha had called on Friday.

Several hours later, after 9 in the night, PTI issued a report that quoted Ahmedabad’s deputy commissioner of police (Zone 2) Vijay Patel as saying the detentions were because Covid-19 guidelines had been violated at the afternoon meet. All eight were released.

By then the “Gujarat model” of arresting farmer leaders while they were speaking to journalists had drawn considerable attention on social media, with some Twitter users saying this proved the government was afraid of the farmers’ agitation.

The Bharat Bandh called to mark four months of the protest had an impact in Bihar, Karnataka, Andhra Pradesh, Rajasthan and parts of Uttar Pradesh, besides Punjab and Haryana, the Morcha said. It acknowledged the support of trade unions, transporters’ organisations, women’s groups and others who have shown solidarity.

In Karnataka, another BJP-ruled state, Kavita Kurunganti of the Mahila Kisan Adhikar Manch was detained along with several other farmer activists.

Reacting to the detentions, the Morcha said: “BJP-ruled governments are brazenly violating basic norms and rules in their anxiety to suppress the farmers’ movement.”

Tens of thousands of farmers have been sitting at Delhi’s borders since November 26 to push for repeal of three farm laws that they believe will leave them at the mercy of large corporate houses and reduce them into labourers on their own land. More than 300 have died.

“Sustaining such a long movement is not only a matter of patience and hard work of the farmers, it is also a shame for the government. Despite extreme weather conditions, farmers stayed resolute, and continue to be in high spirits,” the Morcha said.

This is the second Bharat Bandh that the Morcha has called in four months and both have remained by and large peaceful. The Telegraph Online